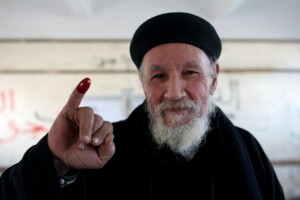 Hymns echoing from the new church in this village in Egypt’s southern heartland could be heard well after sundown Wednesday, a reminder of the jubilant mood as Aziyah’s Christian residents vote on a new constitution.

Outside in the dusty streets, volunteers hurriedly arranged for buses to transport voters to polling stations before they closed. In past elections, Islamists used fear or intimidation to stop Christians from voting against them.

This time around, Aziyah’s Christians faced no obstacles on their way to the ballot box.

‘‘I cast my ballot as I pleased. I am not afraid of anybody,’’ said Heba Girgis, a Christian resident of the nearby village of Sanabu, who said she was harassed and prevented from casting a vote against the 2012 Islamist-backed constitution. ‘‘Last time I wanted to say no. I waited in line for two hours before the judge closed the station.’’

‘‘This time we said yes and our opinion matters,’’ Girgis added as she walked home with a friend after casting her vote. ‘‘This is for our children, for all those who died and suffered. Our word now carries weight.’’

The busy winding alleys of Aziyah and other villages with large Christian populations in the southern province of Assiut were in sharp contrast to the dimmed streets and deserted polling stations of neighboring hamlets, mostly populated by supporters of ousted Islamist President Mohammed Morsi — a testimony to a boycott organized by the Muslim Brotherhood and other Islamist groups against the military-supported constitution.

In Assiut, the birthplace of most of Egypt’s Islamist groups, and neighboring Minya, the campaign was particularly strong against the charter, a heavily amended version of a constitution written by Morsi’s Islamist allies and ratified in 2012.

The new document would ban political parties based on religion, give women equal rights and protect the status of minority Christians. It also gives the military special powers to name its own candidate as defense minister for the next eight years and bring civilians before military tribunals.

Christians number nearly 2 million of the 5 million voters in the southern provinces of Assiut and Minya, almost four times the national average. In Aziyah, which prides itself as the ‘‘capital’’ of Coptic Christians in the south, getting out the vote in support of the constitution was a serious enterprise.

‘‘For the Copts, the responsibility these days doesn’t permit for any apathy,’’ said Muntassir Malek, one of Aziyah’s most ardent get-out-the-vote mobilizers and founder of its new three-story church, a rarity in Egypt, where easier access to permits for building churches is at the heart of the Christian minority’s demands.

During the two-day referendum, security and army troops deployed heavily in the south, where daily protests by Morsi supporters were particular violent.

More than 15,000 troops fanned out across the two provinces, and sandbags were erected outside a number of polling stations. There were frequent helicopter runs and flyovers by F-16 jets. As helicopters hovered over the heads of voters Wednesday in the Christian village of Kunbuah, a loud cheer went up. ‘‘Thank you el-Sissi!’’ the crowd shouted, referring to the country’s increasingly popular military chief, Gen. Abdel-Fattah el-Sissi.

The majority of the voting in Assiut and Minya has been driven by Christians, election monitors said.

‘‘Christians are the No. 1 voters,’’ said monitor Ezzat Ibrahim, adding that turnout overall has been far lower in the south, where support for Morsi was strongest during his presidential bid — a reflection of the Islamist boycott.

Tensions, not new between Islamists and Christians, took a turn for the worse after the Islamists’ rise to political prominence following the ouster of longtime autocrat Hosni Mubarak. Determined to institute Islamic laws in legislation and way of life, the Islamists have alienated Christians— and deepened suspicions that a more Islamic state would only aggravate Christians’ longstanding complaint that they are treated as second-class citizens.

‘‘This is a referendum that will restore Egypt to the Egyptians,’’ said Eva Habil, the 59-year old former mayor of Kunbuah. ‘‘Today, because the state provided me with security and protection, I can go out and cast my vote without fear. You will find all are out. This is my army… protecting me. ‘‘

In Kunbuah’s tiny church, Father Philemon exhorted a group of female parishioners to vote in the referendum, calling it a ‘‘sacred duty.’’
‘‘We need to protect this nation,’’ the priest told a gathering of about 150 women. ‘‘It is a sacred duty to cast your vote. I hope no one is lax.’’

Primarily, Christians are demanding a law that enshrines their right to build churches without the restrictions that have long forced them to build make-shift houses of worship, many of which have been torched by pro-Morsi protesters as part of the backlash against his removal from office. In Aziyah, sandwiched between two strongholds of Islamists, but a rich community that is well connected, there are five churches built without permits, community organizer Malek said.

The new constitution provides that such a law be drafted within a year, Malek said. In addition, Christians have also received reassurances that their longstanding complaints that they are denied high posts in government and the military would be addressed.

Despite the high hopes, the Christian community remains far from reassured for its future in a country still roiled by turmoil. On the first day of voting Tuesday, a pharmacy owned by a Christian was smashed by angry pro-Morsi supporters in the city of Minya. Security officials said an attempted robbery of the home of a prominent Christian businessman was foiled, adding that it was believed to be politically motivated violence to instill fear in the community.

Ibrahim, the election monitor, said text messages were circulated spreading rumors that voting would be extended for a third day, adding that they were likely sent by Islamists playing on the reluctance of some Christians to go out amid heightened security alerts.

In Dalga, a village that has been wrecked by violence between pro-Morsi protesters and the police and where a sizeable Christian minority lives, voting was at a record low compared to the rest of the south. Barely 10 percent of the village’s 18,000 Christian voters had turned up by Wednesday afternoon. Armored vehicles and police cars were deployed outside polling stations as Muslim youths burned tires behind police lines, pelting troops and approaching voters with rocks and marbles.

‘‘In this atmosphere, only those who strongly believe in the cause will go down,’’ said Adel Shafiq, a 27-year-old village resident.

But for Mohammed, a 28-year-old Muslim, the Christians are extorting their claims of being persecuted to keep security forces in the area to support their new-found confidence.

While acknowledging that some harassment of Christian villagers did take place during the rise of Islamists to power, he said that the new police grip on the area, with hundreds of pro-Morsi supporters detained and scores killed during protests, will only exacerbate tensions between Christians and Muslims.

‘‘Now, if these forces withdraw from Dalga, it will not work for the Christians to remain in the village,’’ said Mohammed, who would give only his first name because he is wanted by the police as part of a crackdown on pro-Morsi supporters. ‘‘They will only be driven out.’’

Photo: Father Antonious shows his inked finger after casting his ballot in a constitutional referendum inside a polling station in Dalga village of Minya, Egypt, Wednesday, Jan. 15, 2014. He is one of the priests of the Virgin Mary and St. Abraam Monastery that was looted and burned by supporters of ousted Islamist President Mohammed Morsi in August. Through violence or intimidation, Islamists in villages like this one used violence or intimidation to stop Christians from voting “no” to a 2012 constitution that had paved the way for the creation of an Islamic state. This time around, no one is stopping the Christians and they are voting “yes” on a new charter that criminalizes discrimination and instructs the next legislature to ease restrictions on building churches. (AP Photo/Roger Anis, El Shorouk Newspaper) EGYPT OUT