Without East Jerusalem no peace with Israel, Abbas 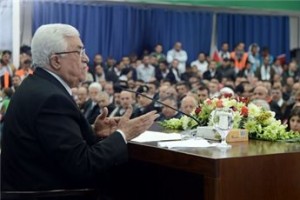 Palestinian Authority president Mahmoud Abbas told a delegation on Saturday that without East Jerusalem as the capital of the future Palestinian state, there will be “no peace between us and Israel.”

Speaking to a delegation from Jerusalem Saturday in his office in Ramallah, Abbas highlighted that the Arab Follow-up Committee would reiterate this stance during a meeting with US Secretary of State John Kerry on Sunday.

“He will be told that occupied East Jerusalem is the capital of the state of Palestine, and without this there will be no peace between us and Israel.”

The current round of negotiations has been limited to nine months after which “we are free to do whatever we want,” he said, highlighting that, “the time frame is limited and not open, and our unanimous position isn’t secret.”

He added that he heard that they (the Israelis) had refused to mention Jerusalem in any talks or negotiations.

“Let them say whatever they say. Unless it is mentioned clearly and marked in big fonts that it is the capital of the state of Palestine, there will be no peace with them and I want them to hear this.”

“Our language is understandable. We have been hearing lots of talks about the capital here and there. The (Palestinian) capital is Jerusalem and its surroundings in Jerusalem which were occupied in 1967.”

Jerusalem doesn’t mean Abu Dis, but Abu Dis is part of Jerusalem, he added, referring to a neighborhood of Jerusalem cut off by the separation wall from the rest of the city.

Abbas highlighted that he is adhering to a stance that has long been official policy.

“We have a right even though we are weak in the world. We will continue to demand our rights and we will realize them.”

Abbas added that the whole world had started to “know and understand our grievances and pains” and that European countries have started to support the Palestinian cause by boycotting products from Israeli settlements. Countries in North America, Latin America and Africa are doing the same, he added.

The Palestinian president denied Israeli claims that an agreement had been reached between the two sides to allow Israel to build more settlements when a group of Palestinian prisoners is released from Israeli jails.

“The Israelis link between prisoners and settlements. When a group is released, they build settlement units and claim this has been agreed on.”

“These are lies as there is definitely no relation between releasing prisoners and settlements. Settlements are illegal from the beginning to the end.”

Peace talks between Israelis and Palestinians were relaunched in July under the auspices of the United States after nearly three years of impasse.

Israel’s government has announced the construction of thousands of housing units in illegal settlements since peace talks began.

The Palestinian negotiating team resigned in protest against continued Israeli settlement construction in mid-November, dealing a major blow to negotiations between Israel and the PLO that had already been stalled.

Negotiator Mohammed Shtayyeh told AFP at the time that they resigned in response to “increasing settlement building (by Israel) and the absence of any hope of achieving results,” following Netanyahu’s announcement that Israel would build 20,000 new settlement homes in the West Bank.

The internationally recognized Palestinian territories of which the West Bank and East Jerusalem form a part have been occupied by the Israeli military since 1967.

Jewish state
Abbas on Saturday also reaffirmed his refusal to recognize Israel as a Jewish state.
“This is a story that we have heard only in the last two years. We won’t recognize and accept the Jewishness of Israel. We have many reasons that prevent us from doing so.”

Israel’s problem is that the Palestinians know more than the Israelis about history and geography, he said. “We talk about what we know,” he said.

“We won’t accept the Jewishness of Israel. We are asking for the 1967 borders.”

Abbas said that when the two sides reach an agreement, the Palestinian lands, borders and airspace would be under full Palestinian sovereignty.

“We will have our own borders and we have nothing to lease,” he explained. “No one can deceive us.”