French first lady in hospital after reports of affair 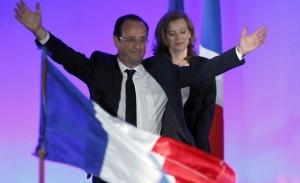 French first lady Valerie Trierweiler has been admitted to hospital following reports of an affair between President Francois Hollande and an actress, but will be discharged on Monday, sources said on Sunday.

Daily newspaper Le Parisien said on its website earlier that Trierweiler, 48, had been taken to hospital after being shaken by a celebrity magazine’s reports of a liaison between her partner Hollande and French actress Julie Gayet.

“She has been in hospital since Friday. She will leave tomorrow,” her spokesman Patrice Biancone told Reuters.

Asked about the future of Trierweiler’s relationship with the president, Biancone said: “She needs rest. Then she will decide what to do.”

A source at the Elysee declined to comment on Trierweiler’s hospitalisation and and the magazine report.

“The president is at work. He is preparing Tuesday’s news conference,” the source said.

On Tuesday, Hollande will face the media in a traditional new year news conference that had been scheduled well before the reports of the affair broke.

Hollande, who came to power in May 2012, is expected to announce new measures to boost the French economy, including lower charges for companies, cuts in public spending and a simplification of business regulation.

Hollande and Trierweiler are scheduled to make a state visit to the United States in February and are set to attend a state dinner with President Barack Obama and his wife Michelle on Feb. 11.

On Friday, Hollande, 59, threatened to sue celebrity magazine Closer, complaining of breach of privacy after it said he was having an affair with Gayet, 41.

Closer published a series of photos of a woman resembling Gayet entering a Paris flat close to the Elysee presidential palace, followed by a man masked by a black motorcycle helmet who the magazine said was Hollande.

Gayet, a mother of two, has dozens of film credits to her name but is little known outside France. Last year, she starred in “Quai d’Orsay”, in which she plays a vampish diplomatic adviser in the foreign ministry.

In March last year she filed a complaint with the Paris prosecutor for breach of privacy over Internet rumours alleging she had a relationship with Hollande.

Hollande and Trierweiler, a journalist for celebrity magazine Paris Match, are not married but have been in a long-term relationship for several years.

Hollande has four children from a previous relationship with Segolene Royal, a senior member of his Socialist Party who ran for president against Nicolas Sarkozy in 2007. Royal announced their separation right after she lost the election.

Speaking on France 2 televison on Sunday, Royal declined to comment on the affair, saying that French people had more important things to worry about.

“It is necessary to turn the page and get back to work,” she said.

Opposition leader Francois Coppe, head of the conservative UMP party, said the affair was “disastrous for the image of France abroad”.

At home, the reports of Hollande’s affair have had little effect on his image and French media at the weekend mainly focused on Closer’s unprecedented breach of presidential privacy rather than on the alleged relationship with Gayet.

A poll by Ifop showed that 84 percent of the public had not changed their opinion about Hollande following news of the affair and that 77 percent considered it “a private affair that only concerns Francois Hollande”.

“At the moment, the revelations about his liaison with Julie Gayet have no effect on public opinion. In fact, he is already so unpopular that there is no change,” said Ifop analyst Frederic Dabi.

In November one survey gave Hollande an approval rating of only 15 percent. He is the most unpopular president in France’s modern history according to several polls.

Hollande’s Culture Minister Aurelie Filippetti said the French were responsible and mature and the Ifop poll showed they respected one another.

“This may be specifically French, but let’s be proud of it,” she said on BFM television.