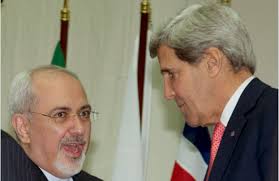 Kerry said Iran could play a role if leaders accept that the goal of the meetings is to establish a transitional government on which all sides agree and that has “full executive authority,” should Syrian President Bashar Assad be persuaded to leave power.

“Iran could participate very easily if they would simply accept publicly the … premise,” he said. “And if Iran doesn’t support that, it’s very difficult to see how they’re going to be ‘a ministerial partner’ in the process.”

Kerry said the premise will be stated in the invitations to the meetings in Switzerland that are being sent out by United Nations Secretary General Ban Ki-Moon.

Iran is a United Nations member state. And the election in June of new leader Hasan Rowhani, who last fall reached a tentative deal to freeze his country’s nuclear weapons program, has given world powers hope the nation might become less isolated.

However, Iran has supplied the Assad regime with weapons in its nearly three-year-long civil war that has killed or forced tens of thousands of Syrians from their homeland.

In addition, American and other world leaders remain suspicious about Iran and its motives, considering how the country’s economy is being crippled by the international sanctions imposed on it for its nuclear buildup.

Assad is being pressured to leave power, and in the meantime has agreed to give up his chemical weapons, which his forces have used on civilians in the civil war.

Iranian Foreign Minister Mohammad Javad Zarif said this fall his country should be invited to the Geneva, Switzerland, talks and that leaders want to help in the effort to get chemical weapons out of Syria.

Kerry suggested Sunday that Iran could also “contribute from the sidelines,” considering the country already has a diplomatic mission in Geneva, where the meetings begin Jan. 22.

However, only those who support the premise will get a formal invitation, Kerry said.