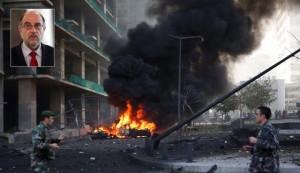 BEIRUT, Lebanon — The images of recent days have an eerie familiarity, as if the horrors of the past decade were being played back: masked gunmen recapturing the Iraqi cities of Falluja and Ramadi, where so many American soldiers died fighting them. Car bombs exploding amid the elegance of downtown Beirut. The charnel house of Syria’s worsening civil war.

But for all its echoes, the bloodshed that has engulfed Iraq, Lebanon and Syria in the past two weeks exposes something new and destabilizing: the emergence of a post-American Middle East in which no broker has the power, or the will, to contain the region’s sectarian hatreds.

Amid this vacuum, fanatical Islamists have flourished in both Iraq and Syria under the banner of Al Qaeda, as the two countries’ conflicts amplify each other and foster ever-deeper radicalism. Behind much of it is the bitter rivalry of two great oil powers, Iran and Saudi Arabia, whose rulers — claiming to represent Shiite and Sunni Islam, respectively — cynically deploy a sectarian agenda that makes almost any sort of accommodation a heresy.

“I think we are witnessing a turning point, and it could be one of the worst in all our history,” said Elias Khoury, a Lebanese novelist and critic who lived through his own country’s 15-year civil war. “The West is not there, and we are in the hands of two regional powers, the Saudis and Iranians, each of which is fanatical in its own way. I don’t see how they can reach any entente, any rational solution.”

The drumbeat of violence in recent weeks threatens to bring back the worst of the Iraqi civil war that the United States touched off with an invasion and then spent billions of dollars and thousands of soldiers’ lives to overcome.

With the possible withdrawal of American forces in Afghanistan looming later this year, many fear that an insurgency will unravel that country, too, leaving another American nation-building effort in ashes.

The Obama administration defends its record of engagement in the region, pointing to its efforts to resolve the Iranian nuclear crisis and the Palestinian dispute, but acknowledges that there are limits. “It’s not in America’s interests to have troops in the middle of every conflict in the Middle East, or to be permanently involved in open-ended wars in the Middle East,” Benjamin J. Rhodes, a White House deputy national security adviser, said in an email on Saturday.

For the first time since the American troop withdrawal of 2011, fighters from a Qaeda affiliate have recaptured Iraqi territory. In the past few days they have seized parts of the two biggest cities in Anbar Province, where the government, which the fighters revile as a tool of Shiite Iran, struggles to maintain a semblance of authority.

Lebanon has seen two deadly car bombs, including one that killed a senior political figure and American ally.

In Syria, the tempo of violence has increased, with hundreds of civilians killed by bombs dropped indiscriminately on houses and markets.

Linking all this mayhem is an increasingly naked appeal to the atavistic loyalties of clan and sect. Foreign powers’ imposing agendas on the region, and the police-state tactics of Arab despots, had never allowed communities to work out their long-simmering enmities. But these divides, largely benign during times of peace, have grown steadily more toxic since the Iranian revolution of 1979. The events of recent years have accelerated the trend, as foreign invasions and the recent round of Arab uprisings left the state weak, borders blurred, and people resorting to older loyalties for safety.

Arab leaders are moving more aggressively to fill the vacuum left by the United States and other Western powers as they line up by sect and perceived interest. The Saudi government’s pledge last week of $3 billion to the Lebanese Army is a strikingly bold bid to reassert influence in a country where Iran has long played a dominant proxy role through Hezbollah, the Shiite movement it finances and arms.

That Saudi pledge came just after the assassination of Mohamad B. Chatah, a prominent political figure allied with the Saudis, in a downtown car bombing that is widely believed to have been the work of the Syrian government or its Iranian or Lebanese allies, who are all fighting on the same side in the civil war.

Iran and Saudi Arabia have increased their efforts to arm and recruit fighters in the civil war in Syria, which top officials in both countries portray as an existential struggle. Sunni Muslims from Egypt, Libya, Tunisia, Saudi Arabia and elsewhere have joined the rebels, many fighting alongside affiliates of Al Qaeda. And Shiites from Bahrain, Lebanon, Yemen and even Africa are fighting with pro-government militias, fearing that a defeat for Bashar al-Assad, Syria’s president, would endanger their Shiite brethren everywhere.

“Everyone fighting in Syria is fighting for his own purpose, not only to protect Bashar al-Assad and his regime,” said an Iraqi Shiite fighter who gave his name as Abu Karrar. He spoke near the Shiite shrine of Sayida Zeinab near Damascus, where hundreds of Shiite fighters from around the region, including trained Hezbollah commandos, have streamed to defend a symbol of their faith.

Some Shiite fighters are trained in Iran or Lebanon before being sent to Syria, and many receive salaries and free room and board, paid for by donations from Shiite communities outside of Syria, Abu Karrar said.

Although the Saudi government waged a bitter struggle with Al Qaeda on its own soil a decade ago, the kingdom now supports Islamist rebels in Syria who often fight alongside Qaeda groups like the Nusra Front. The Saudis say they have little choice: having lobbied unsuccessfully for a decisive American intervention in Syria, they believe they must now back whoever can help them defeat Mr. Assad’s forces and his Iranian allies.

For all the attention paid to Syria over the past three years, Iraq’s slow disintegration also offers a vivid glimpse of the region’s bloody sectarian dynamic. In March 2012, Anthony Blinken, who is now President Obama’s deputy national security adviser, gave a speech echoing the White House’s rosy view of Iraq’s prospects after the withdrawal of American forces.

Iraq, Mr. Blinken said, was “less violent, more democratic and more prosperous” than “at any time in recent history.”

But the Iraqi president, Nuri Kamal al-Maliki, was already pursuing an aggressive campaign against Sunni political figures that infuriated Iraq’s Sunni minority. Those sectarian policies and the absence of American ground and air forces gave Al Qaeda in Iraq, a local Sunni insurgency that had become a spent force, a golden opportunity to rebuild its reputation as a champion of the Sunnis both in Iraq and in neighboring Syria. Violence in Iraq grew steadily over the following year.

Rebranding itself as the Islamic State in Iraq and Syria, or ISIS, the group seized territory in rebel-held parts of Syria, where it now aspires to erase the border between the two countries and carve out a haven for its transnational, jihadist project. Sending 30 to 40 suicide bombers a month to Iraq from Syria, it has mounted a campaign of violence that has led to the deaths of more than 8,000 Iraqis this year, according to the United Nations, the highest level of violence there since 2008.

In recent days, after ISIS fighters rode into the cities of Falluja and Ramadi, they fought gun battles with Sunni tribal fighters backed by the Iraqi government, illustrating that the battle lines in the Middle East are about far more than just sect. Yet the tribal fighters see the government as the lesser of two evils, and their loyalty is likely to be temporary and conditional.

As the United States rushed weapons to Mr. Maliki’s government late last year to help him fight off the jihadis, some analysts said American officials had not pushed the Iraqi president hard enough to be more inclusive. “Maliki has done everything he could to deepen the sectarian divide over the past year and a half, and he still enjoys unconditional American support,” said Peter Harling, a senior analyst at the International Crisis Group. “The pretext is always the same: They don’t want to rock the boat. How is this not rocking the boat?”

The worsening violence in Iraq and Syria has spread into Lebanon, where a local Qaeda affiliate conducted a suicide bombing of the Iranian Embassy in Beirut in November, in an attack meant as revenge for Iran’s support of Mr. Assad.

More bombings followed, including one in a Hezbollah stronghold on Thursday, one day after the authorities announced the arrest of a senior Saudi-born Qaeda leader.

“All these countries are suffering the consequences of a state that’s no longer sovereign,” said Paul Salem, vice president of the Middle East Institute in Washington. “On the sectarian question, much depends on the Saudi-Iranian rivalry. Will these two powers accommodate each other or continue to wage proxy war?”

For the fighters on the ground, that question comes far too late. Amjad al-Ahmed, a Shiite fighter with a pro-government militia, said by phone from the Syrian city of Homs, “There is no such thing as coexistence between us and the Sunnis because they are killing my people here and in Lebanon.”

Photo: Mohamad B. Chatah, a prominent political figure was assassinated in a downtown car bombing that is widely believed to have been the work of the Syrian government in conjunction with its Iranian and Lebanese allies, who are all fighting on the same side in the Syrian civil war. The former Lebanese Finance minister and Ambassador to the US was an outspoken critic of the Syrian regime , Iran and its proxy Hezbollah .