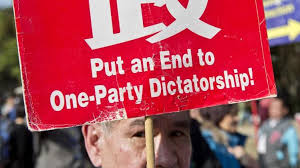 Thousands of protesters demonstrated in Hong Kong Wednesday, calling for free elections and an acceleration in the pace of establishing democracy.
More than 30,000 people participated, protest organizers said, and waved placards calling for universal suffrage and the resignation of appointed chief executive Leung Chun-ying in a march from Victoria to Central, the heart of the city’s business district.

A Hong Kong government spokesman said Wednesday the administration respects the public’s freedom of expression, and added it is “the common aspiration” of Beijing, Hong Kong and the public to implement the election of Hong Kong’s chief executive by 2017, when Leung’s term ends.

Leung’s administration has been mired in political scandal, declining approval ratings and criminal investigations since he took office in 2012 that have led to the departure of several top members of his administration, the Wall Street Journal said Wednesday.