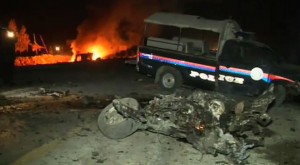 At least three people were killed and 31 others were injured in a suicide car bomb attack on a bus carrying Shiite pilgrims to Quetta, Balochistan on Wednesday. The attack took place in Akhtarabad on the outskirts of Quetta.

“An explosive-laden car rammed into the bus as it passed by,” Capital City Police Officer (CCPO) Abdul Razzaq Cheema told The Express Tribune.

“Three passengers were killed and 31 others, including six policemen, were injured,” he said, adding that the death toll could go up since many of the injured were in critical condition.

The CCPO confirmed the attack was sectarian in nature. “Most of the passengers were Shiite pilgrims returning from Iran,” he said. The bus was coming to Quetta from the border town of Taftan.

The latest attack also comes close to the anniversary of the massive blast which targeted the Hazara community in Quetta. Nearly 200 people were killed in two huge bomb attacks which took place on January 11 and February 16 last year.

According to CCPO Cheema, the police and Anti-Terrorism Force personnel were escorting the bus when it was attacked. “Two police mobiles were driving ahead of the bus while two more trailed behind.” One of the police vehicles was completely destroyed in the attack, he said.

Talking to reporters, Deputy Inspector General Investigation Mubin Zaidi said the police vehicles in escort were installed with jammers as a measure to prevent an attack.

“We are looking into how the attackers managed to succeed despite the security measure,” he said.

Local bomb disposal chief Commander Razzaq said the car had been blown up by somebody sitting inside.

Around 80kg of explosives were used in the blast, an official of the bomb disposal squad said. He added that the device had used ball bearings and other shrapnel to increase destructive capability.

The injured were admitted to the Civil Hospital, the Bolan Medical Complex (BMC) Teaching Hospital and the Quetta Combined Military Hospital (CMH), where a state of emergency was imposed. Security has also been beefed up at the hospitals to prevent a follow-up attack.

Doctors at the Civil Hospital said they received two bodies and ten injured persons. Five of the critically wounded were admitted to the CMH. Fifteen others were admitted to BMC. One succumbed to injuries at the hospital.

Those admitted to Civil Hospital were later moved to BMC and CMH in view of security threats.

“The Civil Hospital is located in the downtown area of Quetta and is vulnerable as such … the hospital has been attacked twice over the last couple of years,” an official of the hospital said.

The Majlis-e-Wahdatul Muslimeen (MWM) announced a three-day mourning following the incident. Its leader Allama Nasir Abbas Jafri said no progress was possible if those behind the attacks were never caught.