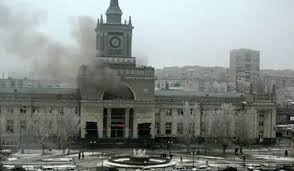 A deadly suicide bombing at a crowded railroad station in southern Russia on Sunday raised the specter of a new wave of terrorism just six weeks before the Winter Olympics in Sochi.

President Vladimir V. Putin’s government has worked to protect the Olympics with some of the most extensive security measures ever imposed for the Games. But the bombing on Sunday underscored the threat the country faces from a radical Islamic insurgency in the North Caucasus that has periodically spilled into the Russian heartland, with deadly results, including several recent attacks.

Security has become a paramount concern at all major international sporting events, especially in the wake of the bombing at the Boston Marathon in April, but never before has an Olympic host country experienced terrorist violence on this scale soon before the Games. And would-be attackers may have more targets in mind than the Russian state.

Current and former American law enforcement and intelligence officials said Sunday that they were more concerned about security in Russia during the Sochi Games than they have been about any other Olympics since Athens in 2004.

Russian officials attributed the explosion on Sunday to a bomb packed with shrapnel, possibly carried in a bag or backpack. It was detonated in the main railroad station in Volgograd, a city 550 miles south of Moscow and 400 miles northeast of Sochi. The bomb blew out windows in the building’s facade and left a horrific scene of carnage at its main entrance. At least 16 people were killed, and nearly three dozen others were wounded, some of them critically, meaning the death toll could still rise.

The blast, captured on a surveillance video camera from across the central plaza in front of the station, occurred near the station’s metal detectors, which have become a common security fixture at most of Russia’s transportation hubs. That raised the possibility that an attack deeper inside the station or aboard a train had been averted.

Vladimir I. Markin, a spokesman for the main national criminal investigation agency in Russia, called the bombing an act of terror, though the exact motivation, target and perpetrator were not immediately clear.

Within hours of the attack, the authorities blamed a suicide bomber, and cited the gruesome discovery of the severed head of a woman, which they said could aid in identifying her as the suspect. Officials later said they had found a grenade and a pistol, and suggested that the attack might have been carried out by a man and a woman working together.

“Most likely, the victims could have been much higher if the so-called protective system had not stopped the suicide bomber from getting through the metal detectors into the waiting room, where there were passengers,” Mr. Markin said in a statement on the agency’s website.

The attack was the second suicide bombing in Volgograd in recent months. In October, a woman identified as Naida Asiyalova detonated a vest of explosives aboard a bus in the city, killing herself and six others.

In that case, the authorities said she was linked by marriage to an explosives expert working with an Islamic rebel group in Dagestan, a republic in southern Russia where the police have struggled to suppress a Muslim separatist insurgency. A month later, the authorities announced that they had killed her husband and four others in a raid. But the attack on Sunday indicated that the threat was far from extinguished.

It was not clear why suicide bombers had twice chosen targets in Volgograd, a city of one million that was formerly called Stalingrad, the site of one of the crucial battles of World War II. It is the nearest major Russian city to the Caucasus, and its proximity may have played a role.

Roman Lobachov, who was among those injured on Sunday, said he was at the station’s security checkpoint when the blast occurred. “I passed through the metal detector, and at that moment there was an explosion,” he said in remarks on the official Rossiya television network. He said he felt a shock like a blow to the head, “and I kind of dropped to the floor.”

Mr. Putin vowed Sunday to redouble security at Russia’s railway stations and airports, which are especially busy around the New Year’s holiday.

The autonomous republics of the North Caucasus, including Dagestan and Chechnya, have been roiled for nearly two decades by armed insurgencies — complex, ever-shifting conflicts that the International Crisis Group recently called “the most violent in Europe today.” The violence has claimed hundreds of lives this year, prompting the Russian authorities to make extraordinary efforts to keep it from reaching Sochi, a resort city on the Black Sea coast among the foothills of the Caucasus. The city will effectively be locked down starting Jan. 7, with all traffic banned except officially registered vehicles. Visitors to the Olympics, which begin on Feb. 7, will be required to obtain a special pass to enter the region.

With security so tight at the site of the Games, experts have warned that insurgents who want to disrupt the Olympics might turn instead to “softer” targets elsewhere. On Friday, an explosion in a car killed three people in Pyatigorsk, another city in the Caucasus; details of that attack remain sketchy, and it is not clear whether it was related to Sunday’s bombing.

Doku Umarov, the Chechen rebel fighter who now leads a terrorist group known as the Caucasus Emirate, vowed in July to attack in Sochi, calling the Games “satanic.”

“They plan to hold the Olympics on the bones of our ancestors, on the bones of many, many dead Muslims, buried on the territory of our land on the Black Sea,” Mr. Umarov said in a video statement. He emerged from the ruins of Chechnya’s separatist movement, which was largely defeated by the Russian authorities under Mr. Putin; he has claimed responsibility for two suicide bombings in Moscow in 2010 and 2011.

One reason American law enforcement and intelligence officials are concerned about Sochi is that the United States has more of an arm’s-length relationship with Russia than with most Olympic host countries. The United States provided extensive resources to the Greek government in 2004 to help with internal security, but the Russians have stronger capabilities and almost always refuse American offers of help.

Rick Nelson, a former counterterrorism official in the George W. Bush administration, pointed out that the Athens games came relatively soon after the Sept. 11, 2001, terrorist attacks.

“The Greeks did not have the resources and ability to provide a lot of internal security, there were a lot of high-profile targets that were spread out, and Al Qaeda was looking for a high-profile target,” he said. “But there weren’t a series of attacks in Greece leading up to the Olympics like there have been in Russia.”

Current and former American officials said they had confidence in the Russians’ ability to protect Sochi and the Olympic venues nearby. “There’s every belief they’ll make it secure and do whatever it takes to do that,” said one senior law enforcement official. “But it is a large country, and these groups can get a lot of bang for their buck if they are able to do something in the country, wherever it is, during the Olympics.”

Another complicating factor is that the United States does not direct a significant portion of its intelligence capabilities toward groups that mount attacks in Russia, because American officials see terrorists in countries like Pakistan and Yemen as posing a greater threat to American interests. And even though the Boston Marathon bombers had ties to Dagestan, officials do not believe the attack was plotted with the help of militant groups there.

“We share some enemies, but not that many,” Mr. Nelson said. “The U.S. just doesn’t put the resources into those areas like it does elsewhere in the world, and there isn’t a ton of intelligence sharing on these groups.”