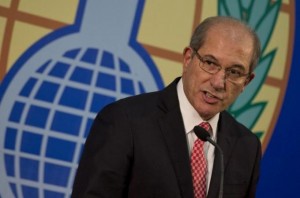 The removal of deadly toxins from Syria under an international effort to rid the nation of its chemical arsenal will likely miss a December 31 deadline, the global chemical arms watchdog said.

Bad weather and shifting battlefronts in Syria’s civil war have delayed the delivery of essential supplies to sites where the toxins are being prepared to be sent to Latakia port, the Organization for the Prohibition of Chemical Weapons (OPCW) said.

“Because of various external influences, including the weather… certain logistical supplies that are needed for this transport, could not be delivered in time.”

Syria has agreed to abandon its chemical weapons by next June under a deal proposed by Russia and hashed out with the United States, after an August 21 sarin gas attack that Western nations blamed on President Bashar al-Assad’s government.

Damascus agreed to transport the “most critical” chemicals, including around 20 tons of mustard nerve agent, out of the northern port of Latakia by December 31 to be safely destroyed abroad away from the war zone.

A Russian diplomat was also quoted as saying on Friday that the deadline would be missed because the toxins that can be used to make sarin, VX gas and other agents still faced a potentially hazardous trip to the port of Latakia.

“The removal has not yet begun,” Russia’s RIA news agency quoted Mikhail Ulyanov as saying after an international meeting on the chemical arms removal effort.

Russia, which has given Assad crucial support during the nearly three-year-old civil conflict in Syria, airlifted 75 armored vehicles and trucks to the nation last week to carry chemicals to Latakia.

Syrian government forces took control of a key highway connecting Damascus to the coast earlier this month, but Ulyanov said the trip could still be treacherous.

“They will have to be taken on dangerous roads, there are several dangerous stretches,” RIA quoted Ulyanov, head of the Foreign Ministry’s disarmament department, as saying.

He also said experts from several countries, the United Nations and OPCW had reached a “common understanding of the main points” of a plan to get the toxins from the port into international waters, but gave no details.

Ulyanov said on Wednesday that while they were in Syrian waters, Russian and Chinese warships would escort the Danish and Norwegian container ships that are to carry the toxins away for destruction further from the war zone.

The OPWC’s Krawinkler said the weather-related closure of the main Beirut-Damascus transport route, as well as constantly shifting battlefronts, were hampering the delivery of logistical supplies and lorries to the toxin storage sites.

The head of the OPCW had said earlier this month the deadline could be missed.