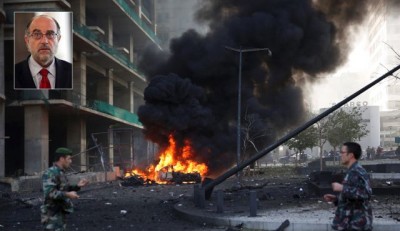 In a statement issued earlier in the day, the March 14 General Secretariat called on all Lebanese to attend the funeral of Chatah and express “overwhelming national outrage” at the death of the ex-minister.

Chatah, a close advisor of Future Movement leader MP Saad Hariri, was killed Friday by a car bomb as he was heading to a March 14 meeting in Hariri’s residence in Downtown Beirut.

Dr. Chatah, a former Lebanese finance minister and ambassador to the United States, died Friday when a car bomb struck his convoy in downtown Beirut as he was heading to a March 14 meeting at Future Movement Saad Hariri’s residence in Downtown Beirut .

The blast killed six others and left 70 wounded. Cars were burned beyond recognition as a wall of flames and thick black smoke shot up from the blast site.

Earlier today Judge Saqr Saqr ordered the erection of a tent at the site of the downtown blast in order to determine the nature of the explosives used in the attack and the size of the crater it created.
Sqqr revealed later that the explosives of the car bomb weighed between 50 and 60 kg ( 110-132 )lbs