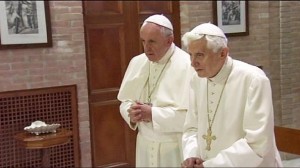 Pope Francis has paid a Christmas visit to Pope Emeritus Benedict during which they said prayers together before have a private conversation.

Television footage released by the Vatican showed the current Pope’s 86-year-old predecessor looking alert and in better health than on previous occasions.

Benedict is the first pope in 600 years to step down, instead of ruling for life. Since February, he has been living in near isolation in an ex-convent on the Vatican grounds.