Kim Jong Un: war could break out "without any prior notice" 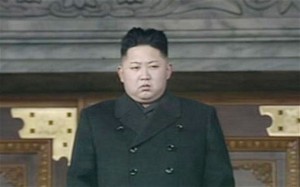 North Korean leader Kim Jong Un has instructed his military to boost its combat readiness, warning a war could break out “without any prior notice.”

The state-run Korean Central News Agency reported Wednesday that Mr. Kim made the comments during a visit to a combat unit on Tuesday.

The move comes as North Korea’s neighbors watch the communist country for signs of instability, following a shocking purge of senior leadership in Pyongyang.

Mr. Kim’s uncle, Jang Song Thaek, thought to be his mentor and second in command, was executed earlier this month after being accused of trying to overthrow the state.

Tuesday, South Korean President Park Geun-hye made her own trip to a frontline guard post, telling troops Seoul would respond “mercilessly to any provocations.”

Tensions regularly flare up between the two Koreas, which remain in a technical state of war, since the 1953 agreement that ended hostilities between them was only a truce.

But December has been unusual in that Jang’s execution was a rare admission of disunity within the ranks of the secretive North Korean leadership.

Many fear Pyongyang could escalate tensions with the West, possibly by a fourth nuclear test or a long-range missile test, in order to build internal unity.

North Korea conducted nuclear tests in 2006, 2009 and earlier this year. All were in violation of U.N. sanctions and received near universal condemnation. It has also carried out satellite launches that most analysts say are disguised long-range missile tests.