Suicide attacker in Lebanon was a Palestinian 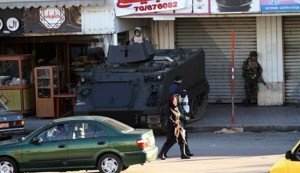 The Lebanese army revealed on Monday that the suicide attacker who assaulted it at a checkpoint in the southern city of Sidon on Sunday was a Palestinian.

An army officer was killed in the incident, as were two armed men who accompanied the attacker, who were gunned down by troops manning the checkpoint.

The army checkpoint was attacked late Sunday, shortly after another military post in the same city had been attacked by a man who hurled a hand grenade towards it. He too was shot dead by troops at the checkpoint.

“Bahaa Eddine al-Sayed, of Palestinian origin, got out of the car he was in while two others stayed inside. He approached soldier Samer Rizk and detonated himself using a home-made bomb,” the army said Monday.

“The soldier died, and two other troops were wounded,” it said, adding that “other troops at the checkpoint opened fire at the car, killing the two Lebanese men Mohammad al-Zarif and Ibrahim al-Mir.”

The army said troops found an explosive belt, detonators and bombs in the car.

Several Lebanese leaders condemned on Monday the attacks against the army .

President Michel Suleiman called the attacks “terrorist crimes,” saying they came “at a time the Lebanese are looking to the army in all regions as the guarantor of security, stability and civil peace, ” according to a presidential statement.

Former Lebanese PM and Future movement leader Saad Hariri also condemned the attacks and said they were at the top of the list of “chaos.”

Hariri called for unity with the army, saying it was “the duty of every citizen who believes in the state and the role of the military institution to be in solidarity with it.”

“Sidon will not allow under any circumstance to be dragged again to a confrontation with the Lebanese army,” he said in reference to the bloody clashes between supporters of Salafist cleric Sheikh Ahmed al-Asir and the military in the coastal city of Sidon last June.

Lebanese Forces leader Samir Geagea also condemned the attack against the troops and reiterated that weapons must be exclusively in the hands of the state.

“The attack against the army in Sidon on Sunday shows the necessity of the state being the sole possessor of arms on Lebanese territory,” Geagea said in a statement.

“The possession and the use of arms trigger people to get armed and soldiers and the Lebanese are paying the price.” He said in a possible reference to the Iranian backed Hezbollah militant group and the extremists Islamist groups
.