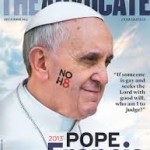 Pope Francis, named “Person of the Year” last week by TIME magazine, has been accorded the distinction once again. This time it’s a leading lifestyle magazine which actively promotes gay rights.

The religious leader is the December coverstar of The Advocate magazine, on which he appears with a photoshopped tattoo on his cheek, spelling out the message “NO H8”, The Independent reported.

On the right of his portrait shot is a quote, stated during an interview with reporters in July on his way from Brazil to Rome, that earned the pontiff the title. “If someone is gay and seeks the Lord with good will, who am I to judge?”.

The pontiff’s history of supporting gay rights, however, hasn’t always been so revolutionary.

He, for instance, stridently opposes same sex marriage and fought against laws being passed to allow it when he was the archbishop of Buenos Aires.

Francis, now the Pope of the Catholic Church, was still picked over Edie Windsor of the US Supreme Court’s Defense of Marriage Act case, whom the magazine refers to as “a hero to LGBT ( lesbian, gay, bisexual, and transgender) Americans for taking the final punch in the fight against the discriminatory Defense of Marriage Act…”

On their decision to crown him their ultimate ‘Person’ of 2013, The Advocate said in a statement:

“Pope Francis is leader of 1.2 billion Roman Catholics all over the world. There are three times as many Catholics in the world than there are citizens in the United States. Like it or not, what he says makes a difference.

“Francis’s view on how the Catholic Church should approach LGBT people was best explained in his own words during an in-depth interview with America magazine in September.

“He recalled, ‘A person once asked me, in a provocative manner, if I approved of homosexuality. I replied with another question: ‘Tell me, when God looks at a gay person, does he endorse the existence of this person with love, or reject and condemn this person? We must always consider the person.’”