Google robots for military use ! 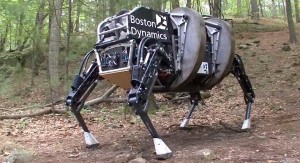 Google has snapped up the creator of the world’s fastest running robot and other eerily realistic animal-like machines supplied to the US military.

The internet company’s acquisition of Boston Dynamics is latest in a string of robotics acquisitions in a mysterious initiative led by former Android chief Andy Rubin.

As Amazon readies a fleet of delivery drones, Boston Dynamics is Google’s biggest prize yet in the robot wars.

Among the creations to crawl, jump and gallop from its labs are Big Dog, a four-legged robot that can clamber over uneven terrain such as snowy forests, even when assailed by kicks from its makers, and Cheetah, which claims to hold the record for the fastest legged robot in the world, running at more than 29 miles per hour.

Many of Boston Dynamics’ robots have been developed with funding from the US Department of Defense’s research unit, Darpa, making Google a military contractor, at least for now.

“The future is looking awesome!” said Mr Rubin in a tweet linking to the New York Times, which first reported the acquisition on Saturday. A Google spokesperson confirmed the deal but declined to elaborate on its price or plans.

The purchase is the latest sign of a sudden and, to many, startling new interest in robots from consumer internet companies, as their operations move from the virtual to the real world.

Last year, Amazon spent $775m on Kiva Systems, a robotics company used to automate its fulfilment centers, and earlier this month, chief executive Jeff Bezos said that the online retailer is developing unmanned aerial vehicles that he hopes will deliver parcels to customers within five years.

Google’s ultimate objective for its growing collection of robots remains unclear but Mr Rubin’s project sits among its so-called “moonshot” ventures, such as self-driving cars and balloons to provide internet connectivity to remote regions.

Mr Rubin stepped down from leading Google’s Android mobile operating system in March and only revealed his new assignment after Mr Bezos announced Amazon’s drone initiative on US television.

Boston Dynamics was founded in 1992 by Marc Raibert, formerly of the Massachusetts Institute of Technology. A much-viewed YouTube video shows Boston Dynamics’ four-legged WildCat robot “galloping” and “bounding” around a car park at speeds of 16 miles per hour, before – perhaps reassuringly – falling to its knees on ice.

The response from the tech community has been a mixture of awe, amusement and apprehension at the potential uses of robots at a company with Google’s scale, resources and trove of personal information.

“Which company that owns all our private data and has the motto “Don’t Be Evil” just bought a military robotics firm?” tweeted Joe Randazzo, creative director at Adult Swim, a comedy and satire channel.

“‘Don’t be evil,’ he cried, while being chased by the robot hounds,” quipped Andy Baio, a tech entrepreneur and founder of the XOXO conference, in a tweet.