13 Missing nuns in Syria claim in video they are safe 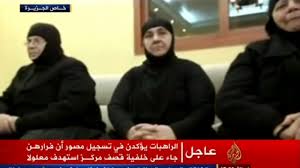 13  nuns who vanished recently from the ancient Aramaic-speaking Syrian town of Maaloula resurfaced on Friday in a video, saying that they had left with rebels to escape shelling in the area and were safe with a Christian family in a nearby rebel-held town.

The fate of the nuns has become the latest mysterious and polarizing incident in the war, with the government accusing Islamist insurgents of kidnapping them to target Christians, rebels saying they are protected guests, and even Pope Francis calling for their swift return.

What no one disputes is that the nuns left Maaloula on Tuesday with insurgents who had just re-entered the town, which has been contested over the past several months between rebels and government forces. Until then, the nuns had been practically the only civilians left in the town, huddled in their convent, Mar Takla, retreating to rooms built deep into cliffs when shelling broke out.

But each side offers a different version of why and how they left, a debate that goes to the heart of their competing narratives of the war. The government casts itself as a secular bulwark against Islamic extremists bent on destroying Syria’s religious diversity, while rebels – at least those who reject the radical views of foreign fighters – say they have no plans to harm Christians and that it is the government that has played on sectarian fears.

State media said the nuns had been forced to leave at gunpoint. But Abu al-Majd, the leader of a local rebel brigade made up of Aramaic-speaking Muslims – part of a diverse social fabric in the area – said the nuns had left voluntarily for the town of Yabroud because Mar Takla, which had remained intact during the initial rebel incursion, was being shelled heavily by the government. Recent footage taken by rebels showed heavy damage.

The Vatican’s representatives in Damascus and Beirut said they had been in touch with the nuns. They said that it was unclear whether their departure had been an evacuation or an abduction, but that they were safe.

Conflicting reports have swirled in recent days, with some Arabic media saying that the Islamist insurgents of the Nusra Front were demanding that the government release 1,000 prisoners in exchange for the nuns, and some rebel spokesmen in the area echoing the demand, and others saying no demand had been made. Rebels said the removal of the nuns was a joint operation between local fighters and outsiders from the Nusra Front and other insurgent groups.