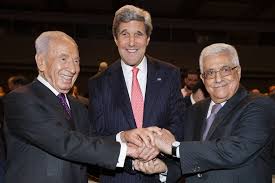 Israel and the Palestinians are within touching distance of a breakthrough agreement that would end their historic conflict, John Kerry, the US secretary of state, has said.

America’s top diplomat struck an unexpectedly upbeat note at the end of a 36-hour visit – his eighth to the region this year – that was billed in advance as an attempt to rescue peace talk mired in crisis.

“I believe we are closer than we have been in years to bringing about the peace and the prosperity and the security that all of the people of this region deserve and have been yearning for,” Mr Kerry said at Tel Aviv’s Ben Gurion airport, adding that he expected to make a return visit in the next two weeks. “The naysayers are wrong to call peace in this region an impossible goal.”

Mr Kerry’s comments came after three meetings in two days with Benjamin Netanyahu, Israel’s prime minister, and another with Mahmoud Abbas, the president of the Palestinian Authority, who had earlier reiterated a threat to seek recourse to the UN if the current negotiations yielded nothing at the end of their nine-month time frame.

The positive tone was all the more surprising given the focus on security arrangements after any peace deal.
Mr Netanyahu has insisted that Israeli forces must maintain a presence in the strategically vital Jordan Valley area of the West Bank – a suggestion the Palestinians have rejected as effectively handing Israel control over their borders.

“I believe we are closer than we have been in years to bringing about the peace and the prosperity and the security that all of the people of this region deserve and have been yearning for,” Mr Kerry said

Osama Qawasmi, an official with Mr Abbas’ Fatah grouping, told the BBC that the Palestinians were prepared to accept Nato or international forces on their territory, but not Israeli troops

Mr Kerry was reported to have arrived with a plan prepared by General John Allen, a retired US military commander, aimed at bridging the gap between the two sides.

Israeli media reports suggested that the US proposals came closer to satisfying Israel’s demands than the Palestinians’. Objections from the Palestinians prompted him to arrange a third, unscheduled meeting with Mr Netanyahu on Friday, Maariv newspaper reported.

“If Israel’s security can’t increase as a result of an agreement, it’s very difficult to make an agreement,” the US secretary of state said, acknowledging concerns voiced by Mr Netanyahu. “Obviously, security is paramount in the minds of the prime minister and his team with respect to their ability to move forward on other issues.”

Earlier, Mohammed Shtayyeh, one of the two Palestinian negotiators in talks that restarted last August, urged the establishment of an international conference in Geneva similar to that which recently produced an interim agreement over Iran’s nuclear programme.

“The success of the Geneva talks over the Iran issue, and the possibility of success for the Syrian issue, makes us wonder why there is no talk about a Geneva-Palestine discussion,” he wrote in Haaretz, a liberal Israeli newspaper. “An active international role under the framework of a multilateral conference could set and implement requirements and obligations for peace rather than granting impunity to the stronger party so it can violate agreements without any sort of arbitration mechanism.”