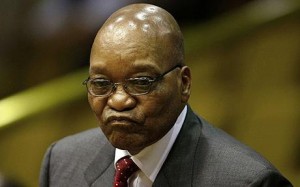 Thousands of South Africans on Saturday called online for the impeachment of President Jacob Zuma, after a newspaper revealed a government document detailing the use of public funds for lavish upgrades to his private home.

The Mail and Guardian weekly said on Friday a provisional report by South Africa’s top anti-corruption watchdog found Zuma had derived “substantial” personal gain from a $21 million “security upgrade” to his home, including a swimming pool and a cattle enclosure.

The leaked document by the Public Protector Thuli Madonsela, entitled “Opulence on a Grand Scale”, recommended that Zuma repay some of the public funds from the improvements to his compound at Nkandla in the hills of KwaZulu-Natal province.

The report of Madonsela’s investigation sparked outrage on social media, with prominent campaigner Zackie Achmat setting up an online petition calling for Zuma’s ouster that had garnered 8,200 supporters a little over 24 hours after the news broke.

The report will likely bolster a perception of widespread corruption under Zuma and could hurt him and his ruling African National Congress (ANC) in an election due in six months.

“Millions of public money used to benefit the president’s private home whilst millions of our people do not have access to basic services such as water, electricity (and) decent schooling,” wrote one petitioner, Yoliswa Dwane.

“This is corruption. It spits in the face of the poor and all people of this country.”

South Africa’s press also weighed in, with the Citizen newspaper splashing the headline “Impeach Zuma” on its front page.

Zuma’s spokesman has declined to comment, while Madonsela’s office has said the leak was “unethical and unlawful”. The ANC has said it believes Zuma has done nothing wrong.

The Mail and Guardian said the improvements included a visitors’ lounge, amphitheatre, cattle enclosure and swimming pool – referred to in documents as a “fire pool” on the grounds that it could double up as a water reservoir for firefighting.

The newspaper said Madonsela’s report accused Zuma, a polygamous Zulu traditionalist whose five years in office have been littered with scandals over violating ethics codes by failing to protect state resources and misleading parliament.

Zuma told parliament last year all the buildings in the sprawling compound had been built “by ourselves as family and not by the government”.