Iran FM admits to parliament the deal was not perfect 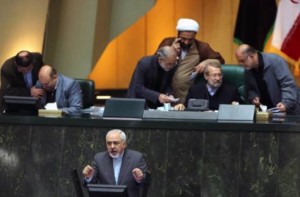 “From the beginning we all knew that entering into negotiations meant facing major difficulties, because in negotiations all your demands cannot be met,” Zarif was quoted on the website of state broadcaster IRIB as telling parliament.

“Therefore, you will face criticism and (verbal) attacks — which are happening now,” he said.

The veteran diplomat, who received a hero’s welcome when he returned home after the deal was clinched early on Sunday in Geneva, admitted that his team could have secured a better deal and that he was ready to face criticism.

“Neither I nor my colleagues claim that it was not possible to get a better result … definitely there is room for criticism.”

The historic agreement rolls back parts of Iran’s nuclear work and freezes further advances in exchange for a limited relief from sanctions that have choked Iran’s economy.

The agreement is valid for six months as negotiations continue towards a final deal.

Western nations and the Israelis have long accused Iran of seeking a nuclear weapons capability alongside its civilian programme, charges denied by Tehran, which insists its uranium enrichment is purely for energy and medical research.

Some parliamentarians, led by hardline MP Rouhollah Hussainian, expressed misgivings at the agreement.

“We are worried about the consequences of the agreement, and we communicate (this disquiet) with the government to find a more prudent and accurate way,” said Hosseinian.

“The wording of the agreement about uranium enrichment is implicit and it can only mean limiting (Iran’s) enrichment right.”

“We are being deprived from having a peaceful nuclear programme while the region’s cancerous tumour can use a nuclear bomb,” said Zakani, referring to Israel, widely believed to be the region’s sole if undeclared nuclear power.

Zarif in his comments to lawmakers also stressed the importance of setting up a joint committee, as agreed in Geneva, to ensure the agreement is fully implemented.

“The International Atomic Energy Agency can assess Iran’s (adherence) but there is no tool (organisation) to supervise whether the other party is carrying out its responsibilities or not,” he said.

Uranium enrichment lies at the heart of Western concerns about Iran’s nuclear activities as it can produce fuel for nuclear reactors or in highly extended form the fissile core of an atom bomb.

Iran denies seeking nuclear weapons, and insists the world should recognise its “right” to enrich uranium.