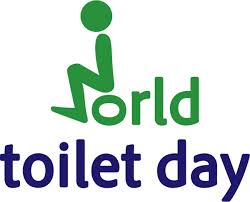 The lack of access to a decent toilet is no joke for a third of the world’s people, but a matter of life and death.

Some 2.5 billion people do not have access to adequate sanitation, the United Nations said, and more than 1 billion practice open defecation — a problem that contributes to countess deaths from preventable diseases.

“We must break the taboos and make sanitation for all a global development priority,” U.N. Secretary-General Ban Ki-Moon said in declaring Tuesday to be the inaugural World Toilet Day.

Each year, more than 800,000 children under 5 die from diarrhea, the U.N. said, many due to poor sanitation.

Lack of access to clean bathrooms in schools also deters many women and girls from pursuing their education after they reach puberty, says a report from WaterAid, a private agency working with the United Nations and the Unilever company, titled “We Can’t Wait.”

Singapore is one of the nations fed up with the problem, and last July it sponsored the U.N. General Assembly resolution declaring Nov. 19 as World Toilet Day.

“Sanitation is central to human and environmental health. It is essential or sustainable development, dignity and opportunity,” Ban said, launching a campaign to end open defecation by the year 2025, and cut in half the number of people lacking decent sanitation.

“When schools offer decent toilets, 11 percent more girls attend. When women have access to a private latrine, they are less vulnerable to assault,” Ban said.

“By working together — and by having a frank and open discussion on the importance of toilets and sanitation — we can improve the health and well-being of one-third of the human family,” Ban said. “That is the goal of World Toilet Day.”