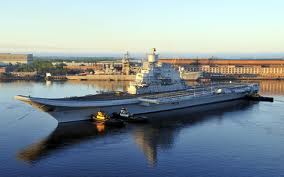 India has heightened its rivalry with China by taking possession of its third aircraft carrier, a refurbished Soviet-era vessel.

The £1.4bn ($2.3bn) aircraft carrier, handed over on Saturday at a north Russian shipyard, will help India to counterbalance the expansion of the Chinese navy.

The 45,000-tonne ship, built in the final years of the Soviet Union and named the Admiral Gorshkov, will be escorted by warships to India on a two-month voyage from Russia’s northern coast. It has been renamed INS Vikramaditya.

A recent upgrade means the carrier, originally designed to carry Yak-38 vertical take-off aircraft, has been re-equipped to carry Mig-29K fighter jets. It can carry up to 30 aircraft and will have a crew of around 2,000.

China and India, the world’s most populous countries, co-existed peacefully for centuries but relations became strained after the Communist party won the Chinese civil war in 1948. There were three conflicts between the neighbours in the second half of the 20th century, although since 1987, Sino-Indian trade has grown rapidly. India views China’s relations with Pakistan with suspicion and China is concerned over Indian activity in the South China Sea. In March this year, tensions between troops were defused after a three-week standoff along their disputed border.

India signed the deal to buy the carrier in 2004 after a decade of negotiations. Its reconditioning was to be finished in 2009, but the price was increased and delivery postponed until 2012 under a new agreement, according to the Indian navy.

The handover was later delayed by another year.

India’s first, British-built, aircraft carrier was bought in the 1960s and was decommissioned in 1997. Another ex-British carrier, the INS Viraat, is reaching the end of its service.

In August, India launched its first home-built carrier. The 37,500-tonne INS Vikrant is expected to undergo extensive trials in 2016 before being inducted into the navy by 2018.

India is the world’s largest arms buyer and Russia’s biggest arms customer, buying about 60% of its arms needs from there. But it has started to look for new suppliers and aims to build more hardware itself as part of plans to spend $100bn in the next 10 years on modernising its military. It has recently rolled out new military purchase rules to attract local companies into the sector.

The INS Vikramaditya was commissioned into the Indian navy at the Sevmash shipyard in Severodvinsk, on the White Sea, in a ceremony attended by the Russian deputy prime minister, Dmitry Rogozin, and Indian defence minister, AK Antony.

China put its first-ever aircraft carrier, another retooled Soviet-made craft called the Liaoning, into service in 2011 amid tensions with Japan over contested islands and a show of strength in the South China Sea.

In the past year China has been involved in a series of territorial spats with Japan over islets in the East China Sea; and with the Philippines, Vietnam and others over the South China Sea, the location of essential shipping lanes and important natural resources, including oil and gas.