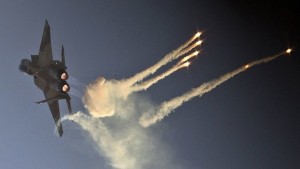 Syrian rebels and a U.S. official cited by CNN said on Thursday Israel had mounted a new attack on a Syrian military base but the Israeli government declined to confirm any strike.

CNN quoted an unidentified U.S. administration official on Thursday as saying Israeli warplanes struck a Syrian base near the port of Latakia, targeting missiles that Israel thought might be transferred to its Lebanese militia enemy Hezbollah.

One Syrian opposition source, a defector from air force intelligence with contacts in the Latakia region, said Israel struck a strategic missile battery near a village called Ain Shikak where President Bashar al-Assad’s forces kept long-range Russian missiles that are among their most powerful weapons.

“We’re not commenting on these reports,” an Israeli Defence Ministry spokesman said. The government has not commented publicly on at least three attacks on Syria earlier this year.

One Israeli official, speaking on condition of anonymity, said he thought that Israel had indeed carried out such a strike. He stressed that he was not entirely certain, however.

Israel has repeatedly warned that it is prepared to use force to prevent advanced weapons, notably from Iran, reaching Hezbollah, which hit northern Israel with hundreds of rockets during a month-long war in 2006.

The Syrian Observatory for Human Rights, which collates reports from opposition activists, said late on Wednesday that there had been an explosion at an air defence base near Jableh, on the Mediterranean coast south of Latakia.

The Lebanese military said six Israeli jets had flown over Lebanese territory on Wednesday. Israeli aerial incursions over Lebanon are frequent, but such high numbers have in the past sometimes been an indication of military strikes against Syria.

Former Syrian intelligence agent Afaq Ahmad, a defector now in exile in France, told Reuters that contacts of his inside Syria, including in Latakia province, told him Russian-made ballistic missiles had been kept at the site that was attacked.

Noting Syria’s failure to retaliate after previous Israeli action, Ahmad said: “Israel knows Assad has lost the ability to respond … So it has been engaging in unannounced attacks on the weapons that could pose the most threat in the hands of Assad or if they are transferred to Hezbollah.”

Israel struck Syrian targets near Damascus in January and twice in May and was suspected of being behind the destruction of a naval installation near Latakia in July.

The Israeli government says Iran, the main sponsor of both Assad and Hezbollah, is arming the Lebanese group. Israel, which sees Iran as bent on destroying the Jewish state, has threatened to use force against an Iranian nuclear program which Tehran denies is intended to produce atomic weapons.