Assad fires his deputy PM for meeting US official 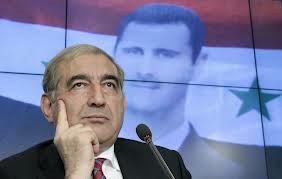 “Jamil was dismissed because he left his center of work without prior permission and did not follow up on his duties … Additionally, he undertook activities outside the nation without coordinating with the government,” said a statement posted on Syria TV.

“He saw Ford after meeting Russian officials in Moscow. The meeting was long but useless,” a Middle East official told Reuters, asking not to be named.

“Jamil put forward what Ford apparently regarded as unworkable proposals regarding the Geneva talks. He also unsuccessfully tried to win U.S. backing to including him on the opposition side in the Geneva talks,” he said.

President Bashar al-Assad considers Jamil as part of what he calls “patriotic opposition,” the political parties that oppose the regime but have not joined the armed uprising against Assad.

Peaceful anti-government protests that began in Syrian in May 2011 developed months later into an armed conflict in which more than 100,000 people were reportedly killed.