Dozens of Pilgrims Die in Stampede in India 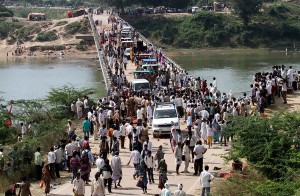 Thousands of pilgrims in northern India panicked on Sunday when they thought the narrow bridge they were crossing was collapsing, Indian officials said. The resulting stampede left at least 89 people dead and about a hundred more injured.

About a half-million worshipers, by Indian news media estimates, had flocked to the Ratangarh Temple in northern Madhya Pradesh State for a religious festival. A top state official, Anthony J.C. De Sa, told The Hindu, a daily newspaper, that about 25,000 people were on the bridge over the Sindh River, which is 23 feet wide, on Sunday when a section of the bridge’s railing broke, setting off a rumor that the whole bridge was about to give way.

Television images of the scene afterward showed piles of clothing littering the bridge. Many people are believed to have drowned after jumping off the bridge into the river; others were injured in the crush above.

In the aftermath of the panic, relief efforts were delayed by traffic jams, and frustrated bystanders later turned on the police, pelting them with stones. A deadly stampede took place at the same site in 2006.

There were conflicting reports about the start of the crush on Sunday. Some witnesses said the police had initiated it by charging into the crowd swinging canes, but police officials denied the reports. Others said a group of pilgrims had intentionally spread a rumor that the bridge was about to collapse, in the hope of cutting the long line of people waiting to cross. Still others said that they had heard that the bridge had been hit by a tractor and was unstable.

Mr. De Sa said the bridge was less than four years old and “in good condition.”

One survivor, Atul Chaudhary, told the BBC’s Hindi service that he heard screams, and then crowds began pushing their way off the bridge.

“Several people could be seen flattened to the ground in the midst of the melee,” he said. “Some of the youngsters panicked and jumped into the swollen river. I and my friends were close to the exit point, and along with several others ran for safety.”

Some witnesses said the police failed to act promptly to control the crowd.

The Madhya Pradesh government has opened a judicial inquiry into the causes of the stampede.

Mass deaths occur often at pilgrimages in India, when vast, dense crowds put heavy burdens on transportation and safety infrastructure. In August, an express train was unable to stop and plowed into pilgrims crossing a set of train tracks in the state of Bihar, killing more than 30 people. A similar number were trampled rushing to a train platform in February, marring the 55-day Kumbh Mela festival, whose crowds were estimated at 80 million.

The stampede on Sunday occurred during the run-up to state elections. Officials quickly promised compensation of 150,000 rupees, or about $2,450, for the families of each of those killed. Those with serious injuries will receive 50,000 rupees, or about $820. Prime Minister Manmohan Singh released a statement expressing condolences.

“On this day of festivities, our hearts and prayers are with the victims and their families,” said the statement, according to Indian news services.