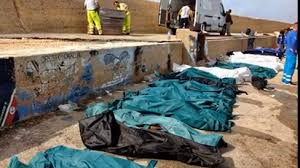 At least 27 people died when a boat carrying more than 200 migrants capsized in the Mediterranean, Malta’s prime minister has confirmed.

Italian and Maltese ships – backed by helicopters – were scrambled to the scene and are searching in darkness.

The boat capsized 120km (70 miles) off Lampedusa, an Italian island where more than 300 African migrants drowned when their vessel went down last week.

The vessel is believed to have encountered difficulties just before sunset.

Reports said people on board had crowded to one side of the boat, causing it to capsize, as they tried to get the attention of a passing aircraft.

It was spotted by the Maltese air force, which alerted Italian naval vessels still in the area after last Thursday’s boat disaster.

Maltese authorities are co-ordinating the mission, which is taking place in the country’s territorial waters.

Mr Muscat’s office said 147 people were now on board a Maltese patrol boat and were being taken to Malta. Another 56 had been saved by Italian crews.

Italy’s Ansa news agency earlier said at least 50 fatalities had been seen in the water, but this has not been officially confirmed.

The BBC’s Matthew Price in Lampedusa says that the helicopters and navy crews were able to pull many people to safety, but darkness is now hampering rescue operations.

The nationalities of the migrants were not immediately known.

Cecilia Malmstrom, the EU Commissioner for Home Affairs, praised the swift Italian and Maltese rescue effort, which she said had helped reduce the potential death toll.

She said in a statement that she was following the operation with “sadness and anxiety”.

“These new horrible events are happening while we still have the shocking images of the tragedy in Lampedusa in our minds,” she added.

Lampedusa, which lies 290km (180 miles) off the coast of Africa, is a key destination for migrant vessels bound for Europe.

Last Thursday, at least 319 people – mostly Somalis and Eritreans – died when their boat sank near the island.

Only 155 people were rescued of more than 500 believed to have been on board, making it one of the worst in a series of migrant boat tragedies to blight the region.

Earlier on Friday, at least 500 more migrants travelling in separate boats were rescued in coastguard operations near the Italian island of Sicily.

Also on Friday, a separate boat accident off the Egyptian port of Alexandria claimed the lives of at least 12 migrants.

Egyptian security officials said 116 people, mostly Palestinians and Syrians, were pulled from the water and taken to a police station.