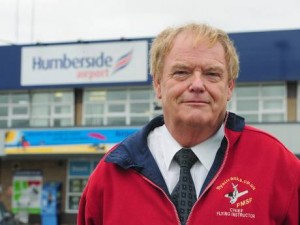 A pilot who fell ill at the controls, leaving a passenger who had never flown a plane before to land the aircraft, has died.

The passenger has been praised for successfully carrying out a safe emergency landing after the pilot on the plane he had boarded was taken ill midair, rendering him unable to operate the controls.

Humberside Police confirmed the pilot had died last night and said an investigation into what happened was under way.

Humberside Police said: “The pilot of the light aircraft who became incapacitated while flying back to Sandtoft airfield during the evening of Tuesday 8 October, resulting in an emergency landing at Humberside Airport, was sadly pronounced dead last night.

”Police are not treating the death as suspicious and, as such, a file will be prepared for the coroner in order to establish what led to the death of the pilot by way of an inquest.

“Formal ID of the pilot is likely to take place later today.”

Emergency services gathered at Humberside Airport, north Lincolnshire, on Tuesday evening after receiving a distress call from the plane as it approached Humberside International Airport.

A multi-agency emergency response was declared at 6.20pm as the aircraft issued a mayday call as it approached the airport.

Two flight instructors were called to the scene to instruct the passenger in the light aircraft as he attempted to land the plane.

Although the aircraft landed heavily and bumped the runway, it was considered a relatively normal landing.

Roy Murray, one of the flight instructors who helped the passenger land the plane, told the BBC the passenger had no flying experience and did a “remarkable job”.

He said the passenger had carried out a “good landing, actually”, considering he had never flown a plane before and “was flying blind” in the dark.

“I think without any sort of talk-down he would have just gone into the ground and that would have been the end of it.”

The pilot and passenger are understood to be the only people onboard the aircraft and it is thought the pair, who have yet to be named, left a small airfield at Sandtoft on a flight training day.