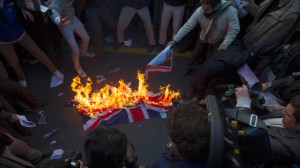 In an effort to repair long-strained relations, Britain and Iran announced Tuesday that each would appoint a chargé d’affaires, a rank below ambassador, to work toward resuming full diplomatic ties. The diplomats will remain in their own countries, but will discuss reopening embassies in London and Tehran.

Relations between the countries were downgraded to the lowest level short of a break in 2011 after protesters in Tehran attacked the British Embassy.

Iranians still consider Britain, the former colonial power there, a powerful agent of opposition to Iranian independence and the Islamic Revolution.

“I’ve made very clear to Mr. Zarif that we are open to more direct contact and further improvements in our bilateral relations,” Mr. Hague said.

The new Iranian government of President Hassan Rouhani has spoken of greater openness to the West as Tehran prepares for new negotiations next week with the United Nations Security Council on Iran’s disputed nuclear program. Iran is eager for the United States and the Europeans to lift harsh economic sanctions, which were imposed in response to Iran’s regular flouting of Security Council resolutions that it halt uranium enrichment and comply with International Atomic Energy Agency demands that it fully disclose its nuclear activities.

The Obama administration, while skeptical of Mr. Rouhani’s message of openness, would like to resolve tensions with Iran through negotiations, while Israel has warned that Iran may be trying to buy time for developing a nuclear weapon.

Mr. Rouhani, like the Iranian supreme leader, Ayatollah Ali Khamenei, insists Iran has no intention of building a nuclear bomb. But for Western and Israeli experts, the Iranian program has no other logic, though American officials say they believe Iran has not yet decided to build a nuclear weapon.

Confirmation of the British announcement came from Tehran and the foreign ministry spokesman there, Marziyeh Afkham.

“Issues pertaining to the historical Iranian perception of the U.K. and its role in Iran, disagreements between the two countries on the nuclear issue, human rights and the Middle East are among points that Iran will discuss with the U.K. in their future talks,” Mr. Afkham said, an Iranian news agency reported.

Photo: PROTESTERS BURN A BRITISH FLAG TAKEN DOWN FROM THE BRITISH EMBASSY IN TEHRAN NOVEMBER 29, 2011.