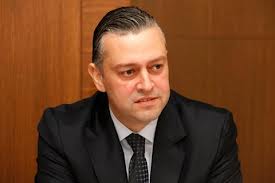 Future Movement Parliamentary bloc MP Hadi Hbeish hosted on Friday a dinner banquet that was attended by key figures in Lebanon, including President Michel Suleiman and Premier-designate Tammam Salam, with the aim of discussing the the formation of a new government, An Nahar reported on Monday.

Salam became the new Prime Minister designate just over six months ago but failed so far to form a new government.

Since his appointment Salam has been trying to form a cabinet based on giving an equal share to the rival political blocks – March 14 , March 8 and the centrists, but the Hezbollah led March 8 alliance is insisting on having a bigger share in the cabinet to allow it to veto its decisions . Salam has been opposed to giving any party a veto power ( usually referred to as a blocking third ) . He has on several occasions floated the idea of forming a neutral cabinet of technocrats, but Hezbollah and FPM leader MP Michel Aoun have been opposed to this idea too and this is why Lebanon is still without a government and Najib Mikati is still acting as the caretaker Prime Minister.