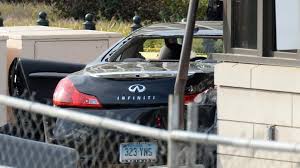 Washington, DC- A dramatic car chase through the streets of Washington from near the White House to the U.S. Capitol ended in gunfire on Thursday when law enforcement officers shot and killed the driver as lawmakers and aides huddled in a lockdown.

The incident rattled Washington less than three weeks after a government contractor opened fire at the Washington Navy Yard, about 1.5 miles from the Capitol, killing 12 people and wounding three others before he was shot to death by police.

The car involved in the chase was registered to Miriam Carey, 34, of Connecticut, and law enforcement officials believe she was the driver, the Washington Post reported, citing officials. NBC News also identified the driver as Carey.

Reached by phone at Washington’s Metropolitan Police headquarters, a police officer confirmed that Carey was the driver, but declined to provide his name.

“The suspect in the vehicle was struck by gunfire,” Washington’s police chief, Cathy Lanier, told reporters.

Driving a black car, the woman rammed security barricades “at the very outer perimeter of the White House,” U.S. Secret Service spokesman Ed Donovan said. Then the car, carrying a 1-year-old girl, raced up Pennsylvania Avenue toward the Capitol where Congress was in session.

Police chased and fired at the car. It came to a halt near the Capitol building, said Capitol Police Chief Kim Dine.

“My understanding is there was a 1-year-old child in the car,” Dine said. “I believe one of our officers rescued the child,” who was taken to a hospital.

It appeared there was no connection to terrorism, Dine said of the incident.

Michael McCaul, the chairman of the House of Representatives Homeland Security Committee, told CNN that officials believed the woman driving the car may have had mental health problems.

“I got that from multiple sources – that they think she may have had some mental health issues,” he said. “Obviously the way she responded at the gate near the White House and then turning around and hitting Secret Service.”

The woman was a resident of Connecticut and the girl in the car was her daughter, McCaul said.

Hours after the woman’s fatal encounter with officers, the FBI and other agencies were conducting a search of the sprawling condo complex in Stamford, Connecticut, where neighbors say she lived. Dozens of neighbors were forced to wait outside.

They drank coffee and some talked on cell phones trying to arrange to stay with friends and relatives.

“When we got home late this afternoon, there were three helicopters flying above, there were Haz-Mat (hazardous materials) trucks and bomb-squad trucks coming in, and police were telling people to get out of their condos,” said Krysta Valentine, 29, a resident of the area who said she had seen Carey at times.

When the shooting erupted outside the Capitol building, lawmakers were trying to find a solution to a budget impasse that partially shut down the U.S. government this week. The Capitol was locked down for about an hour during the incident.

Lawmakers were told to shelter in place on the floor of the House. Outside, some tourists were frightened.

“I was just eating a hot dog over here and I heard about four or five gunshots, and then a swarm of police cars came in wailing their sirens,” said Whit Dabney, 13, who was visiting Washington from Louisville, Kentucky, and heard the shots a couple of blocks away.

“They ran all the red lights. It was a very dangerous situation,” Gilbert said.

Two officers were hurt in Thursday’s incident. One was a Secret Service officer who was struck by the suspect’s car outside the White House, Donovan said.

The other was a Capitol Police officer whose car struck a barricade during the mid-afternoon chase. It ranged over about a mile and a half and lasted just a few minutes, officials said.

All the shooting appears to have been done by police. Law enforcement sources said the suspect did not shoot a gun and there is no indication she had one. 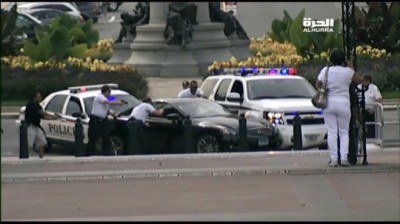 Just before the Capitol lockdown, Senator John McCain of Arizona was on the Senate floor urging that President Barack Obama and a bipartisan group of senators launch negotiations to break the deadlock over government funding and a debt limit increase.

The House had just passed a bill to fund the National Guard and reservists who are not on active duty during the shutdown.

The Capitol police, who were deemed “essential” staff, were at work despite the government shutdown, but they are not being paid.

“What really comes home to me is that these are all people who are working without pay right now,” Representative Matt Cartwright, a Democrat from Pennsylvania, said on CNN. He was outside on a Capitol balcony when he said he heard seven or eight shots “all in less than a second.”

Obama was briefed on the incident, a White House official said, providing no further details.

Security is tight near the Capitol, but there have been previous shootings in the area. In 1998, a gunman burst through a security checkpoint at the Capitol and killed two Capitol Police officers in an exchange of fire that sent tourists and other bystanders diving for cover. The suspect, Russell Eugene Weston Jr., was not charged with a crime because of apparent mental instability.