Is the Arab Spring moving south to Sudan? 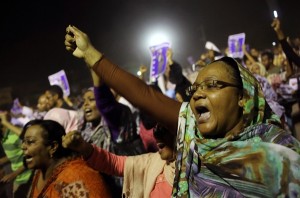 The wave of civil wars, revolutionary demonstrations, protests and riots dubbed the “Arab Spring” that spread across North Africa and into the Middle East in 2011 may well be heading south into Sudan, experts and activists say.

In recent weeks, thousands of protesters have taken to the streets in cities across the East African republic, including in the country’s capital Khartoum, for the most widespread public demonstrations since president Omar al-Bashir seized power in a bloodless military coup 24 years ago.

Protests quickly escalated from demonstrations over a cut in fuel subsidies to wider dissent against the country’s leadership after security forces killed at least 50 people last week, according to the African Center for Justice and Peace Studies and human rights watchdog Amnesty International.

“This is our Arab Spring, this is the African Spring,” Ahmad, an activist with the main demonstration movement Girifina — or “We’re Fed Up” — told NBC News.

He did not give his last name for fear of reprisals.

“We’re tired of this corrupt government,” he added. “They started shooting at people, aiming at them. We will not put up with this anymore.”

In the year since it lost more than 70 percent of its oil reserves when South Sudan split, Sudan has faced soaring inflation.

Apparently heeding advice from a 2012 International Monetary Fund report that called fuel subsidies “inefficient and inequitable” and said their “removal would deliver substantial gains to Sudan,” Bashir removed them as part of a raft of austerity measures.

“The price of petrol has risen enormously and that of course has ramifications,” said Amin Mekki Medani, a spokesperson for the Confederation of Civil Society, a non-governmental organization in Sudan. “Bread is transported, milk is transported, vegetables are transported and so it has an effect on every aspect of simple life.

“The price of a loaf of bread remains the same, but the size and the weight of the bread has reduced by about 30 percent, so it’s not the same. People can see what is happening,” Medani said.

Amir Ahmad, a political blogger and activist, said the unrest deepened after Bashir berated the public in a September 19 speech for being ungrateful over how his regime had improved their lives.

Addressing a crowd of students affiliated with his ruling National Congress Party, Bashir boasted that the Sudanese people were only introduced to pizza and hot dogs after he deposed the democratically elected government in 1989, according to the Sudan Tribune.

“We had years of injustice, incompetence, killings and genocide, so there was a lot of bottled up frustration, so people began to come out,” Ahmad said, adding that it showed how out of touch the government was with the mood of the nation.

“[The protests] could be seen as an extension to the Arab Spring,” said Islam Al Tayeb, a Middle Eastern research analyst at the International Institute for Strategic Studies. But she added that the Sudanese government had also learned from the experiences of their neighbors.

“You can see that from the type and speed of the measures they have taken,” Tayeb said.

One protester, who asked not to be named fearing for his safety, told NBC News that “some people were shot in the back as they ran.”

Sudan’s largest daily newspaper, Al-Intibah, said on its official website Sunday that authorities had forced it to stop printing indefinitely because it did not tow the government’s line when reporting the protests, according to The Associated Press.

Reuters also reported that foreign news organizations were forced to close their offices after being accused of pursuing an anti-Bashir agenda.

Additionally, Internet routes into and out of Sudan appeared to shut down simultaneously at the height of the protests, according to Internet monitoring company Renesys.