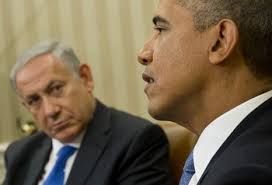 Iran’s foreign minister warned Barack Obama Tuesday that “flip-flop” threatened efforts to build trust, after the US president told the Israeli premier the military option remained on the table.

His remarks came after Obama told visiting Israeli Prime Minister Benjamin Netanyahu that the use of force was still on the table in dealing with Iran’s controversial nuclear programme.

“We take no options off the table, including military options, in terms of making sure that we do not have nuclear weapons in Iran,” Obama said, just days after his historic call with Iranian President Hassan Rouhani spurred hopes of a diplomatic breakthrough in the decade-long standoff.

Obama has argued that Iran must take verifiable steps, through actions and not just words, to prove it is meeting “international obligations fully and that they are not in a position to have a nuclear weapon”.

But he has also said that Iran should retain the right to a “peaceful” civilian nuclear energy programme after doing so.

In the meeting Monday, Netanyahu warned that sanctions must be maintained against Tehran and even strengthened if necessary, saying Iran had agreed to negotiate because of the punitive measures — which have hurt its economy badly.

Zarif was critical of the notion.

Obama’s “presumption that Iran is negotiating because of his illegal threats and sanctions is disrespectful of a nation, macho and wrong,” he said in another post on his Twitter account.