Assad worried Syria strike may tip the balance of power 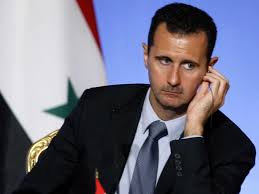 Syrian President Bashar al-Assad denied that he was behind a chemical weapons attack on the Syrian people and said evidence was not conclusive that there had been such an attack, CBS reported on Sunday on its news program “Face the Nation.”

“There has been no evidence that I used chemical weapons against my own people,” CBS reported Assad said in an interview conducted in Damascus.

The full interview will air on the CBS network and PBS’s “Charlie Rose” show on Monday. Rose said he met with Assad in Damascus. The CBS “Face the Nation” report was a summary of the interview and did not contain any audio or video of Assad.

Assad spoke as the Obama administration was pressing its case in the United States for congressional authorization of a U.S. strike against Syria in response to the August 21 sarin gas attack that Washington said killed more than 1,400 Syrians, including several hundred children.

The Obama administration has accused Assad’s forces of carrying out the attack. Assad has blamed the rebels.

Passage by Congress of the authorization for use of force is by no means certain. Votes are expected this week.

Rose, speaking by telephone, said Assad would neither confirm nor deny that Syria had chemical weapons, but if they did they would be under centralized control. The United States should produce evidence of his involvement, if it has the evidence, Rose reported Assad said.

Assad warned, the CBS interviewer said, that if there was a military strike by the United States, there would be retaliation by those aligned with Syria. Syria was as prepared as it could be for an attack, Rose said he was told by Assad.

Rose said he raised the question of whether Assad feared the attack might degrade the Syrian military and tip the balance in the 2-1/2-year-old civil war, and was told by Assad that he was very concerned about that.

He had a message for the American people that they should not get involved in another Middle Eastern conflict.