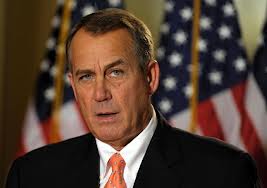 Following a meeting with President Obama and other key congressional leaders on Syria, Speaker John Boehner says, “I’m going to support the president’s call for action.”
The top elected Republican in Washington, Boehner said following a meeting at the White House that he intended to support Obama’s plan for limited strikes against the regime of Bashar Assad in Syria.

As some Republicans signal their reluctance to approve Obama’s request for authority to intervene in Syria, Boehner’s endorsement could be influential. The GOP speaker is often hesitant to get out in front of his unruly Republican conference on major issues, giving Boehner’s pronouncement on Tuesday all the more weight.

“The use of these weapons has to be responded to,” Boehner said.

House Minority Leader Nancy Pelosi, D-Calif., emerged following the meeting to express her own support for the strikes, on a humanitarian basis. But she said that Obama should lay out more of the evidence against Assad to help build his case for action.

“I believe the American people need to hear more about the intelligence that supports this action,” she said.

If Boehner and Cantor can deliver a large number of Republican votes, they could combine with Democrats in the House to help advance the resolution supporting the use of force in Syria through the politically-tricky House of Representatives.