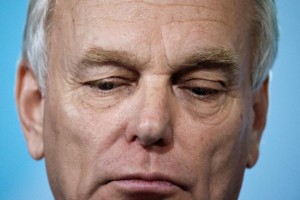 The dossier is said to show that Syria has large chemical stockpiles and was behind a chemical attack which the US says killed more than 1,400 people.

France and the US are both pushing for punitive military action against the Syrian regime. The UK parliament has voted to stay out of such a raid.

Damascus denies the attack, blaming rebel forces for the use of chemicals.

But Nato Secretary General Anders Fogh Rasmussen has said he is personally convinced that a chemical attack took place and that the government of President Bashar al-Assad was responsible.

There must be “a firm international response” to deter any future use of such weapons, he said, or else it would send a “dangerous signal to dictators all over the world”.

But he added that he did envisage Nato having a role in such action, saying he would expect any military response to be “a very short, measured, targeted operation” and that the alliance’s resources would not be needed.

Meanwhile fighting has continued across Syria, in a conflict which has already left an estimated 100,000 people dead since 2011. On Monday, activists said 20 rebel fighters were killed in an army ambush in Adra, north-east of Damascus, AFP news agency reports.

The alleged chemical attack took place in the Gouta, an eastern area of the capital on 21 August. The US says 426 children were among the more than 1,400 people killed.

The US administration has already presented its case that the Assad regime was behind the attack, and now Mr Ayrault will present France’s own intelligence dossier to parliamentary leaders.

“We are going to give the MPs everything we have – classified until now – to enable every one of them to take on board the reality of the unacceptable attack,” he said on Monday.

French MPs are due to debate the issue at an extraordinary session of parliament on Wednesday.

President Francois Hollande is constitutionally able to order an attack without parliamentary approval, but there is growing pressure for a vote on Syria, as happened in the UK and has been promised in the US.

US lawmakers are due to reconvene next week, and White House officials have said that when it comes to a vote, they believe there will be enough support for the president.

US Secretary of State John Kerry said on Sunday samples from hair and blood gathered after the 21 August attack had tested positive for “signatures of sarin”, and that he was confident Congress would give its approval for strikes, “because they understand the stakes”.

However some lawmakers have expressed doubts about President Barack Obama’s plan for a “limited, narrow” military operation, questioning its purpose and effectiveness.

By putting off an attack and seeking congressional approval, President Obama has taken the biggest gamble of his presidency, the BBC’s North America editor Mark Mardell says.

He adds that it would be disastrous for the president if Congress does not back him, and his decision to call for a vote would look foolish.

On Sunday, Syrian Deputy Foreign Minister Faisal Mekdad told the BBC’s Jeremy Bowen in Damascus that any attack against Syria would be “support for al-Qaeda and its affiliates, whether Jabat al-Nusra or the State of Islam in Syria and Iraq”.

Jabat al-Nusra and other groups linked to al-Qaeda have come to play a significant anti-Assad role in the conflict.
Mr Mekdad – considered to be highly influential within the Assad government – also warned that possible US intervention would deepen “hatred for the Americans” and destabilise the whole Middle East.
President Obama was “determined to launch an attack”, he said, and the US Congress would base any decision on attacking Syria on whether it was in the interests of Israel.

Syria is known to have extensive supplies of chemical weapons.

Mr Obama has often said that using them would cross a “red line”, prompting US intervention.

Damascus has been fighting rebel forces since March 2011.

More than 100,000 people are estimated to have died in the conflict, and at least 1.7 million have become refugees.