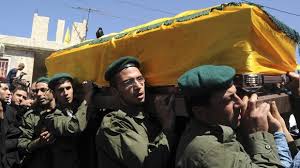 The Free Syrian Army ( FSA) claimed that it killed 20 Hezbollah fighers in an ambush in Sayyida Zeinab in Damascus. No other details were made available.

This comes after an earlier report indicated that a military commander of Lebanon’s militant group Hezbollah was killed in fighting near Damascus and has been buried in his southern Lebanese hometown of Kfar Sir in the Nabatiyeh area, residents said Monday.

“Hezbollah military commander Hossam Ali Nisr, aged 33, was buried on Saturday. He was defending Sayyida Zeinab,” which houses a Shiite shrine southeast of Damascus, “when his group was attacked and he was killed,” one resident told AFP, without giving a date.

According to Free Lebanon Radio Nisr was killed with several other Hezbollah fighters but their funeral was delayed till after the Eid el Fitr ( end of Ramadan feast) .

Hezbollah has experienced recently a series of setbacks. Last weekend, rebels in Syria claimed that they had killed at least 42 Hezbollah fighters, who were fighting with soldiers loyal to President Bashar al-Assad. The deaths were reported by Al-Arabiya, which quoted a rebel leader as saying that the operation was a “high quality one.”

Syrian opposition leader Ahmad Jarba said Syria is now being run by regime allies Iran and Lebanon’s Hezbollah, with President Bashar al-Assad out of the picture, in an interview published Sunday.

Assad “no longer runs Syria. The real rulers of Syria are the Iranian (elite) Revolutionary Guard… with the participation of (Lebanese Shiite) Hezbollah fighters,” Jarba said.

Assad is “a killer and a criminal, and… he has collapsed,” the National Coalition chief charged.

Hundreds of Hezbollah fighters have reportedly been killed in recent months in Syria and buried in Lebanon.