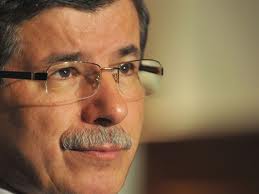 Foreign Minister Adnan Mansour received a phone call from Davutoglu during which they discussed developments on the subject of the kidnapped pilots, the ministry said.

“Davutoglu told… Mansour he was deeply concerned about the kidnapping,” and said it “might have negative repercussions on bilateral relations between the two countries.” Foreign Minister Adnan Mansour received a phone call from Davutoglu

The Turkish pilots were kidnapped on Friday by a group demanding Turkey use its influence with Syria’s rebels, who it backs, to secure the release of nine Lebanese Shiites kidnapped in Syria in May 2012.

Meanwhile, Mansour said “Lebanon rejects any kidnapping that takes place on its territory,” according to the ministry.

He also “emphasized the solid relations” between Turkey and Lebanon, and said the authorities “have been making every effort to ensure (the pilots) are set free”.

The statement comes a day after Ankara’s ambassador to Lebanon said Turkey has closed its cultural centre and commercial office in Beirut.

He also said “Turkish Airlines’ offices have been operating from Beirut International Airport” instead of at their downtown Beirut facility.

A previously unknown group calling itself Zuwwar Imam al-Rida has claimed responsibility for the kidnapping.

The families of the Lebanese pilgrims, who were returning from a trip to Iran when they were kidnapped, have called repeatedly for the release of their relatives.

The pilots were kidnapped in a majority Shiite area of Beirut, controlled mainly by the powerful Lebanese movement Hezbollah, a close ally of President Bashar al-Assad.

Since Friday, Hezbollah’s Lebanese critics have repeatedly accused the Shiite group of covering up for the abduction.