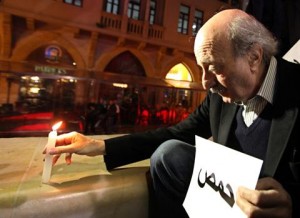 In was described as a dramatic reversal of his previous position in support of a national-unity cabinet, Jumblatt said that he does not oppose the formation of a neutral cabinet that does not include any of the major political parties.

“I support the suggestion to form a cabinet that does not include parties like Hezbollah, the Future Movement, the PSP and others,” Jumblatt told the Egyptian As-Sharq al-Awsat news agency.

“Let there be a national dialogue conference to discuss controversies and a technocratic cabinet to solve the citizens’ problems,” Jumblatt added.

His comments come after Future Movement leader and former PM MP Saad Hariri last week proposed that the Future Movement and Hezbollah bow out of a future cabinet to facilitate its formation.

Commenting on the situation in Syria Jumblatt said : “There has been some changes to the battlefield. The rebels took control over a strategic airport in Aleppo, as well as many ammunitions stocks belonging to regime forces,” stressing that the fall of the Syrian regime is imminent and the countdown has begun.

Similarly Lebanese President Michel Suleiman who is also like Jumblatt a part of the centrist bloc was quoted by Al Liwa newspaper as saying in a report published on Wednesday that he is not opposed to a neutral cabinet and will sign such a decree without any hesitation.

PM-designate Tammam Salam has been trying to form a cabinet based on giving an equal share to the opposing political blocks – March 14 , March 8 and the centrists, but the Hezbollah led March 8 alliance is insisting on having a bigger share in the cabinet to allow it to veto its decisions . Salam has been opposed to give any party a veto power ( usually referred to as a blocking third ) . He has recently been floating the idea of forming a neutral cabinet of technocrats, but Hezbollah has been opposed to this idea too this is why Lebanon is still without a government and Najib Miqati is still acting as the caretaker Prime Minister.