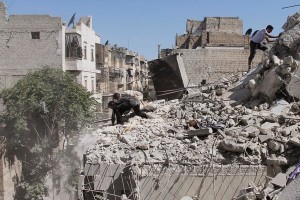 A missile attack by government forces on the city of Aleppo in northern Syria killed at least 29 people, including 19 children, Syrian monitors said Saturday.

According to the monitors at the Syrian Observatory for Human Rights, the Friday night attack struck the Bab al-Neirab neighborhood in the city’s southwest, home to the headquarters of a number of rebel brigades, including the Islamic State of Iraq and Syria, which is linked to Al Qaeda. It was unclear how many of the dead were civilians, but the Syrian Observatory, which monitors the conflict from Britain through a network of contacts in Syria and which sympathizes with the opposition, said four women were among the dead.

The forces of President Bashar al-Assad have stepped up the use of such missiles, which often reduce city blocks to rubble, a strategy that analysts say suggests that the military lacks sufficient infantry to accomplish its goals.

In central Syria, government forces struck a powerful, if symbolic, blow against rebel forces by seizing the historic Khalid bin al-Waleed mosque in the city of Homs, which rebel forces had held since last year.

Homs, Syria’s third-largest city, was one of the principal launching sites of the anti-Assad uprising that turned into a civil war. The government has been eroding the rebels’ grip on parts of the city since it seized the town of Qusayr near the border with Lebanon last month, cutting a key rebel supply line into Homs Province.

The state news service, Sana, quoted an unnamed military official as saying government forces had seized the mosque and the area nearby, killing a number of fighters and defusing explosives planted in the area. The Syrian Observatory confirmed the mosque’s capture, saying fighters from Hezbollah and Syrian militias had fought alongside the military.

Also on Saturday, Syrian state news media reported that talks between government officials and a delegation from the United Nations over allowing access for investigators to the sites of suspected chemical weapons attacks during the war had resulted in “an agreement on the ways to move forward.” The report gave no further details.

Reports of small-scale attacks involving chemical weapons have surfaced a number of times in the past year, and the war’s continued escalation has raised fears that Mr. Assad’s forces could deploy chemical weapons on a wide scale or that those weapons could fall into the hands of extremists.

Syria has yet to let the full team of United Nations investigators enter the country, and the delegation’s visit last week sought to negotiate access. The government has wanted to limit the places the investigators can visit.

One site the investigators hoped to visit was Khan al-Assal, a town west of Aleppo where both the government and the rebels reported a deadly chemical weapons attack in March, with each side accusing the other.

Visiting the site could prove difficult because rebel fighters took it over on Friday, reportedly killing about 150 soldiers. The Syrian Observatory said about one-third of them had been executed by an extremist rebel brigade after surrendering.

The Syrian state news agency said on Saturday that 123 people had been killed “in cold blood” in Khan al-Assal, some of them soldiers but most of them civilians. It accused “armed terrorist groups” — the government’s blanket term for the rebels — for the killing and said it showed that “the only way to save all Syrians is to get rid of them, wherever they are.”

Neither version of the events in the town could be verified.