Hezbollah blames Israel, US for blacklisting by EU 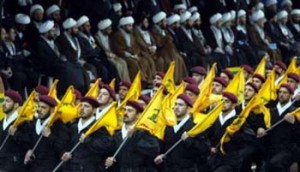 Hezbollah denounced the European Union’s decision to list its military wing as a terrorist organization, calling the move “aggressive and imbalanced.”

The Iranian-backed Lebanese Shiite group is already viewed as a terrorist organization by the United States and Israel. In recent months, it has joined forces with Syrian President Bashar al-Assad in that country’s ongoing civil war.

Hezbollah issued a statement Tuesday saying the EU’s decision Monday was “written by American hands using Israeli ink” and that “all (that) was left for the Europeans to do was to sign the document and approve the legislation.”

Lebanese Prime Minister Najib Mikati said he hoped that the European Union had read data and facts about Hezbollah more thoroughly before making the decision, the state-run National News Agency reported. The report did not specify what data about Hezbollah the prime minister was referring to.

The European Union agreed to target just the military component, a European diplomat told CNN. Critics of such an approach say designating part of an entity isn’t effective or practical.

But Israeli Justice Minister Tzipi Livni’s spokeswoman called the decision “correct and just,” adding that it “puts an end to the wrong argument” that Hezbollah’s military activities are absolved by the group’s political status.

“Even if Hezbollah is a political party, that does not whitewash and make legitimate their terrorist activities,” the spokeswoman said.

U.S. Secretary of State John Kerry said the move “will have a significant impact on Hezbollah’s ability to operate freely in Europe by enabling European law enforcement agencies to crack down on Hezbollah’s fundraising, logistical activity and terrorist plotting.”

“As Hezbollah has deepened its support for the brutal Assad regime and worked to expand its global reach through increased involvement in international criminal schemes and terrorist plots around the world, a growing number of governments are recognizing Hezbollah as the dangerous and destabilizing terrorist organization that it is,” Kerry said.

The Syrian National Coalition, an affiliation of Syrian dissident groups, praised the EU’s move — but said the group could do more.

“We urge the European Union to extend their decision to include all of Hezbollah political officials who are part of the decision making” of the party’s military wing, the SNC said in a statement Tuesday.

The SNC also called for “the trial of all of Hezbollah’s officials for their crimes of terrorism committed against our Syrian people and on our soil.”

Hezbollah was formed after Israel invaded Lebanon in 1982 to go after the Palestine Liberation Organization. The group has been accused of high-profile terror attacks over the years.

“Shortly thereafter, Hezbollah bombed the American and French Marine Barracks in Beirut, killing 241 Americans and 58 French service members with one of the largest explosive devices ever detonated during a terrorist attack.”

The group also conducted a series of kidnappings, airplane hijackings and bombings in the 1980s and 1990s, Donilon wrote.

He said the group has tried to portray itself as a political entity focused on social services and defending the country.

“But it is an illusion to speak of Hezbollah as a responsible political actor,” Donilon said. “Hezbollah remains a terrorist organization and a destabilizing force across the Middle East.”