Obama told Saudi king he is committed to Syrian rebels 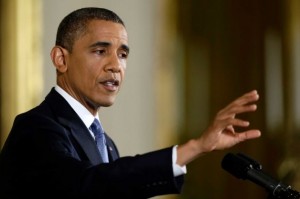 US President Barack Obama told Saudi Arabia’s king on Friday that he is committed to providing U.S. support to Syrian rebels who have been waiting for shipments of light arms that have been stalled in Washington.

No U.S. arms have reached the Syrian rebels, who are struggling to hold back an offensive by the Syrian government. The American weapons have been caught in a Washington impasse as some members of the U.S. Congress fear the arms will end up in the hands of Islamist militants.

A White House statement said the two leaders discussed the civil war in Syria and expressed strong concerns about the impact of the conflict on the region.

“The president emphasized the United States’ continued commitment to provide support to the Syrian Opposition Coalition and the Supreme Military Council to strengthen the opposition,” the statement said.

On Egypt, Obama expressed concern about deadly violence that broke out after the military took over. He stressed his desire for an inclusive political process that will enable an early return to a democratically elected civilian government in Egypt, the White House said.