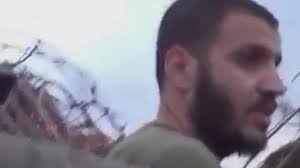 Simmering hostility between Syria’s mainstream rebels and jihadists has erupted into naked violence, with a Free Syrian Army commander in the coastal province of Latakia being shot dead by an Al-Qaeda front group.

Kamal Hamami — better known by his nom-de-guerre Abu Bassir al-Jeblawi — was killed on Thursday by fighters of the Islamic State of Iraq and Syria (ISIS), one of the main jihadist groups operating in Syria, said witnesses and a monitoring group.

The killing follows months of tension between the mainstream, Arab and Western-backed rebel Free Syrian Army (FSA) and jihadist groups affiliated to Al-Qaeda, most of whose fighters are non-Syrian.

A rebel allied to Abu Bassir said via Facebook he had witnessed what he said was a cold-blooded shooting at an ISIS checkpoint when the rebel chief was on his way to visit fellow fighters at the front.

“They told us we weren’t allowed to cross, that they had orders from their emir, Abu Ayman,” who heads ISIS in Latakia, said the witness, Abu Ahmad, who defected from the ranks of Syria’s army to join the rebels.

“Abu Bassir told them: ‘Did you come to our country to help us or to be a burden?’ Abu Ayman then arrived at the scene. He said he would kill Abu Bassir, who replied: ‘You have nothing to do with Islam.’ Abu Ayman then killed him,” he said without elaborating.

The Syrian Observatory for Human Rights gave a different version of events, saying Abu Bassir was killed when ISIS fighters tried to destroy an FSA checkpoint in the Jabal al-Turkman region, in the north of Latakia province.

“FSA rebels fired into the air, and subsequently, an ISIS fighter shot Abu Bassir dead and wounded two other fighters from his battalion,” said the Observatory, which relies on a broad network of activists, doctors and lawyers for its reports.

The FSA’s political and media coordinator Louay Muqdad said those behind the killing must “urgently” be handed over to the rebels for trial.

Experts link rising tensions to Western promises of aid to Syrian so long as they can guarantee weapons will not fall into the hands of extremists.

“A lot of these groups, they have to show a hardline against Al-Qaeda because that is what their funders expect from them,” Middle East specialist Aron Lund told AFP.

“If they want money from US they have to push out Al-Qaeda,” Lund added.

French President Francois Hollande, whose country has been at the forefront of efforts to isolate the Assad regime, last month urged the FSA to push groups like Al-Nusra out of the zones they control.

The young commander, in his 30s, hailed from a wealthy family from the city of Latakia, but chose to join the rebellion in the province’s mountains.

“They (jihadists) have left their homes, their countries to come fight our war. But this is our country and we don’t want outsiders to come and rule over it. They must realise that they have to leave once the war ends,” Abu Bassir told AFP in May.

Highly organised and respected by members of his Ezz Bin Abdel Salam battalion, Abu Bassir “was a moderate and believed in the idea of a democratic state”, one of his friends, who would be named only as Aboud, told AFP via the Internet.

“During the liberation of the Christian village of Burj al-Kassab, a jihadist destroyed a cross. A fight broke out between Abu Bassir and the jihadists over this incident,” he added.

Residents of Latakia province “are very angry” over the assassination, said Aboud, adding that “the regime (of President Bashar al-Assad) has tried for two years to kill Abu Bassir. And now these people come and kill him”.

The incident is not the first of its kind.

Late last week, dozens of FSA fighters were killed in a battle against ISIS in the northwestern province of Idlib. The FSA battalion chief there was beheaded by ISIS and his brother slaughtered, said the Observatory.

In the early days of the Syrian uprising, when opponents of the regime were desperate for assistance from any quarter, jihadist fighters were welcomed but a spate of abuses has fuelled a growing backlash.

In early June, ISIS was accused of executing a teenager in Aleppo in northern Syria, because he had committed “blasphemy”.

Anti-Assad activists living in rebel areas are increasingly turning their attention to creating anti-ISIS campaigns, as the group’s abuses multiply.

There are two main Al-Qaeda linked factions, both with Iraqi origins — the Al-Nusra Front, which has operational independence, and the Islamic State of Iraq and Syria (ISIS), a front for Al-Qaeda in Iraq. They are believed to have several thousand fighters on the ground in Syria.

While the FSA is fighting to overthrow the Assad regime, the jihadist groups are intent on installing an Islamic caliphate in Syria.