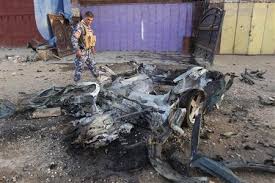 Bomb and gun attacks across Iraq have killed more than 30 people, many of them members of the security forces, in the past day, officials say.

Eleven people were killed as mourners gathering for a funeral were targeted in Muqdadiyah, north-east of Baghdad.
Further west, 14 deaths were reported after an assault on members of the security forces in Anbar province.

More than 2,500 Iraqis have died in violent attacks since April, according to UN figures released last week.

Iraq has been experiencing its worst sectarian violence for a number of years. According to the UN data, May was the bloodiest month since June 2008.

The recent surge in violence comes amid heightened tensions between Iraq’s Sunni and Shia communities, amid claims by the Sunnis that they are being marginalised by Prime Minister Nouri Maliki’s Shia-led government.

Attack at sundown
In Muqdadiya, a car bomb went off at a mourning ceremony and then a suicide bomber detonated explosives as attempts were made to take away the wounded.

More than 20 other people were injured in the attack in the town, some 80 km (50 miles) from the capital.

Late the previous evening, an army checkpoint and a security guards compound were attacked by gunmen near Haditha.

Eleven of the dead were special police assigned to protect a nearby oil pipeline – they were attacked as they sat down in a trailer to break their Ramadan fast at sundown, a local official told the Associated Press.

Attacks were also reported in the Anbar province towns of Ramadi, Khaldiya and Fallujah, as well as in Tikrit and Kirkuk.

Violence erupted in April when Iraqi security forces stormed an anti-government Sunni protest in the city of Hawija, killing and wounding dozens of protesters.

Although the violence is less deadly than that seen during the height of the insurgency in 2006 and 2007, it is the most widespread since the US military withdrawal in 2011.