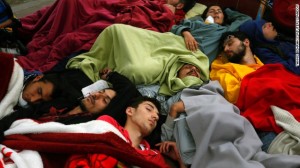 The meeting cames after 24 hours of calm in Istanbul and followed a Wednesday evening gathering between the prime minister and a group of individuals attempting to act as mediators for the protesters in Gezi Park.

Earlier, the prime minister called on protesters camped out in the park to pack up and leave. “We are running out of patience,” Recep Tayyip Erdogan told members of his party in the capital, Ankara, on Thursday.

“I am making this warning for one last time.”

The government has been delivering conflicting messages. On the one hand, it appeared to slightly soften its stance by saying it would hold a referendum on Gezi Park’s fate, but at the same time, the government delivered yet another ultimatum Thursday for the demonstrators to evacuate.

Erdogan intensified his heated rhetoric, at times pushing into the absurd.

Gezi Park reeks, making it high time for police to clear it out, Erdogan said.

“It stinks of pee. In fact, some of them even poo in there.”

He lashed out at rowdy demonstrators, whom he called “vagabonds” and “thugs.” But he also told peaceful protesters they need not complain about the actions of his police, because they had put themselves in the line of tear gas fire by associating with the wrong people and illegal groups.

“Where dry wood is burning, fresh wood will also burn unnecessarily,” Erdogan said. He vowed to continue routing out rowdies and ordered peaceful protesters out of the park, asking them to leave police alone with “illegal groups.”

“Come forward, mothers, fathers, please, claim your children. Let those children withdraw from that area,” he said. “We are on the one hand waiting for the judiciary process. On the other hand, we would take a step towards a plebiscite and we’ll follow whatever Istanbul people decide.

“But please own up to your children, take them out,” he continued. “Otherwise we cannot wait any longer, because Gezi Park does not belong to occupation forces; Gezi Park belongs to Istanbul people and the whole nation.”

Erdogan’s party has organized counterprotests for the weekend to give a voice to Turkey’s “quiet majority to the people and the world,” he said. They will show the international community “a real, true picture of Turkey.”

Two rallies will be held away from anti-government protests to avoid possible confrontations, he said.

On Wednesday, the prime minister met with protest mediators for four and a half hours, but some leaders, such as with the Taksim Solidarity, one of the main protest groups, backed out because of what it described as heavy-handed police measures Tuesday night in the square.

But on Thursday night, leaders of Taksim Solidarity were heading to meet with the prime minister in Ankara.

Harsh actions against protesters could strain Erdogan’s strategic friendships with much of the West — relationships that are particularly critical in light of the civil war ravaging Turkey’s neighbor, Syria. Turkey is a NATO ally with a democratically elected government.

What began in late May as a demonstration focused on the environment — opposition to a plan to build a mall in Gezi Park — has evolved into a wider protest against Erdogan that’s spread around the country.

Erdogan also dealt a slap to the European Union for a resolution it passed Thursday condemning his country’s police crackdown on protesters and the suppression of opposition voices.

“The European Parliament’s decisions about us, I am not recognizing those decisions,” he said.

The comments triggered a thunderous standing ovation and roaring cheers from party members.

“How dare you make such decisions about my country?”

His angry words were echoed by Foreign Minister Ahmet Davutoglu, who said the European Parliament had no right to censure Turkey if it didn’t do the same when other European nations tackled protests in similar ways.

For example, he said, water cannons and tear gas were used by German security forces at an Occupy protest in Frankfurt on June 1, the same day as they were deployed in Turkey, without drawing criticism.

“Turkey will always support the freedom of demonstration … but if this is misused, we distinguish between the innocent demonstrators and the marginal groups who try to misuse the right of demonstration,” he said.

He accused some people of trying to damage Turkey’s image in the eyes of the world.

Turkey has for many years expressed the desire to become a member of the European Union.

Experts and human rights groups say Erdogan’s government lags when it comes to human rights and freedom of expression by opponents.

“Prosecutors and courts continued to use terrorism laws to prosecute and prolong incarceration of thousands of Kurdish political activists, human rights defenders, students, journalists and trade unionists,” Human Rights Watch wrote in a 2013 report on Turkey.

Turkish journalists are afraid to write anything critical of the government, and media companies are slapped with huge tax fines for covering uncomfortable topics.

According to the Committee to Protect Journalists, Turkish authorities have targeted journalists with detention for covering the protests.

The prime minister has said many times he will not back down.

On Wednesday evening, Taksim police took two foreign nationals into custody on grounds that they resisted police, according to the Turkish Radio and Television Corp. official website. It was reported that the two men were journalists working for a Canadian television and covering the protests in Taksim Square.

On Thursday, the U.S. Embassy in Ankara issued a security message to American visitors, highlighting a risk of terrorist attacks on U.S. diplomatic, consular and military facilities in Turkey.

“The U.S. Embassy has received an increased number of reports indicating terrorist organizations are targeting these facilities,” the advisory said.

It said U.S. diplomatic facilities will remain open for business “in the absence of specific and credible threat information that cannot be otherwise countered.”

Photo: Protesters sleep in Gezi Park in Istanbul’s Taksim Square early Thursday, June 13. Turkey’s prime minister on Thursday called on protesters camped out in the park to pack up and leave. Protests that began as a demonstration against the planned demolition of the park have grown into general anti-government dissent across the nation.