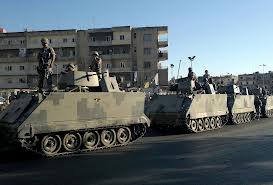 Beirut, Lebanon – The military command issued a strong warning Friday that Lebanese should be “wary of plots” that could turn the nation into a battlefield like next door in Syria.

“In recent days, some groups have seemed determined to stoke security tensions against the backdrop of the political divisions in Lebanon over military developments in Syria,” the command said in an unusually blunt statement.

Military commanders have been “trying for several months to work firmly, determinedly and patiently to prevent Lebanon being turned into a battlefield for regional conflicts and to prevent any spillover of the events in Syria,” the command said.

The military then urged Lebanese “to express their political views on events in Lebanon and Syria by peaceful and democratic means, and not to be driven by groups wanting to use violence as a means to achieve their ends”.

The warning came as the French government, through its ambassador, urged all Lebanese to abide by the self-avowed “dissociation policy” set out in 2012 by the nation’s key sectarian leaders. The policy was designed to keep Lebanon neutral in the Syrian civil war and aloof from the strife raging next door.

French Ambassador Patrice Paoli stressed to a delegation from the Maronite Christian community the need for the Lebanon to avoid getting entangled in the Syrian crisis.

The Lebanese government officially is neutral in Syria’s civil war, but the country’s militant Shia movement, Hezbollah, has become deeply involved in the fighting. Hezbollah is anxious to prevent the ouster of Syrian President Bashar al-Assad, a longtime patron of the group and ally of its main paymaster and arms supplier, Iran.

On Wednesday, as a result of Hezbollah’s increased military intervention, Syrian government forces were able to deal a sharp blow to mainly Sunni Muslim rebels by retaking the strategic town of Qusair near the Lebanon frontier. Hezbollah fighters were considered key in the government victory.

But Lebanon’s Sunni leaders reacted with fury at Hezbollah’s actions and called for a jihad against the Shia movement.

A day before Qusair fell, General Selim Idriss, leader of the main rebel umbrella group, the Free Syrian Army, warned that his fighters were prepared to take the conflict into Lebanon in pursuit of Hezbollah militiamen. Hezbollah, he said, was “invading” Syria and Lebanon was doing nothing to stop them.

Rocket attacks on Hezbollah villages in the Bekaa Valley this week suggests that Syrian rebels or their Lebanese supporters were making good on Idriss’ threat.

There are signs also that Syrian rebels or their Lebanese supporters intend to strike at prominent Lebanese figures who oppose the uprising against Assad: two Lebanese Sunni Sheikhs who are sympathetic to Hezbollah and Iran narrowly escaped assassination attempts this past week.

On June 3, gunmen targeted Sheikh Maher Hammoud as he left his home in Sidon. The would-be assassins unleashed a barrage of automatic gunfire at the pro-Assad sheikh and his bodyguards returned fire. Hammoud escaped unharmed and quipped later. “It seems that the assailants lack professionalism. Thank God for that.”

On the same day another imam, this time in east Lebanon near the border with Syria, was attacked by assailants who opened fire on the car of pro-Hezbollah Sunni Sheikh Ibrahim Braidi in the town of Qab Elias. Security sources said they suspect there’s a connection between the attacks and believe jihadists backing the Syrian rebellion may be responsible.

Political and religious leaders condemned the attacks on the Sunni sheikhs.
“Assaulting religious scholars … is a flagrant violation aimed at igniting strife among the Lebanese,” Lebanon’s mufti, Sheikh Mohammad Rashid Qabbanisaid in a statement.

The government in Beirut has struggled for months to limit the fallout from the civil warfare in Syria. Above all, it wants avoid another Lebanese civil war like the 1975 to 1990 fighting that left more than 120,000 Lebanese dead.

The Lebanese Army has moved quickly in the past to put down any clashes between Sunni gunmen loyal to the Syrian rebels and pro-Assad Alawites or Shiites in the northern Lebanon.

Last October, the army managed speedily to impose order when sectarian clashes erupted in Tripoli and Beirut following the assassination of Lebanon’s security chief, Brig. Gen. Wissan al-Hassan. Many Lebanese – including the dead general’s aides — suspect Hassan was killed on the orders of Assad and that Hezbollah may have played a role in the bombing.

Adding to the tensions are rocket attacks on Hezbollah villages in the Bekaa Valley and the expectation that Hezbollah will retaliate against Sunni villages that have been helping to supply Syrian rebels.

“If that happens, we are a few short steps away from things getting out of hand,” said a major in Lebanese military intelligence.
VOA