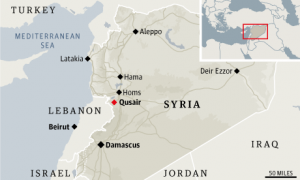 Women and children are dying in the battle for control of Qusair and more than 600 people there have been injured, a doctor in Syria has told the BBC.

He said he had seen Hezbollah fighters with his own eyes, and they had strengthened the Assad forces.

He accused the Syrian President Bashar al Assad of oppression, saying civilians in the city did not have drinking water or bread.

“Up until now he [Assad] hasn’t let a single child leave the city… he actually wants Hezbollah to take the lives of our women and children,” he said.

Conditions in the western Syrian town of Qusair, cut off for weeks by government forces, are increasingly desperate. One doctor described the situation to the BBC’s World Tonight.

The doctor, Muhammad al-Muhammad, described the “oppression” felt in the beleaguered Syrian town.

He said more than 600 injured people were trapped in rebel-held districts with no access to medical assistance.

Many people were running short of food and were “waiting three to four days just for drinking water,” he said.

Dr Muhammad, based in the north of Qusair, described how the rebel Free Syrian Army were “just unable to control the situation here”.

“The battle is getting bad. There are kids and women that are dying in the battle for more control.”

“Women and children were “without water and bread,” he said. “Everyone’s very sad – a lot of crying, a lot of sadness.”

“We have seen Hezbollah fighters with our own eyes,” he said.

“And we have many corpses of members of Hezbollah that have been fighting on the ground and have lost their lives.”

He believes Hezbollah has made a significant impact.

“I think that Hezbollah has made a huge difference two years into the fighting.”

“It started with the Free Syrian Army and the Assad regime and after two years they are tired of fighting but Hezbollah has definitely changed the game. They have come in and they have definitely strengthened the Assad army in Qusair and particularly in the suburbs.”

Dr Muhammad said he would remain in Qusair, despite the heavy violence. “We will fight until the end, even if that means we will die here.”