Syria’s FSA calls the attack a” warning to Hezbollah” 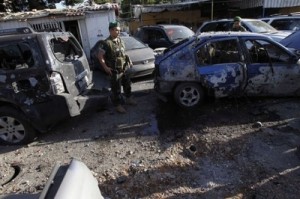 “It is a terrorist and criminal act that we condemn no matter who executed and planned it, especially since it targeted a residential area,” Hariri said in a statement issued on Sunday.

He also said: “We thank God that the damage was limited and that the wounded Syrian workers are being treated.”

“It is not enough, when such incidents occur, to denounce strife. Our national responsibility requires all leaders who are concerned with the safety of Lebanon and the Lebanese, to warn those who are igniting this strife.”

Earlier on Sunday, four people were wounded when two rockets exploded in the Hezbollah heartland of southern Beirut.

The blasts followed a speech delivered by Hezbollah leader Sayyed Hassan Nasrallah on Saturday evening during which the latter vowed that the regime of Bashar al-Assad and his party would emerge victorious in Syria.

Lebanese President Michel Suleiman also denounced the attacks and described the perpetrators as “terrorists who don’t want to see peace and stability in Lebanon.”

It was the first time the Lebanese capital’s southern suburbs have been targeted during the two-year-old conflict in neighboring Syria, where Hezbollah has thrown its military might into the regime’s fight against rebels seeking to topple President Bashar Assad.

FSA calls the attack a warning

The rocket attacks on the suburbs of Beirut are only a warning to Hezbollah, the commander of the rebel Free Syrian Army group said Sunday.

Speaking to the Lebanese satellite TV channel LBC, Ammar al-Wawi warned of the consequences of Hezbollah’s intervention in the Syria conflict. He urged the Lebanese government to stop Hezbollah from intervening in Syrian affairs and hinted to possible attacks against Beirut, Tripoli and the Beirut airport.

“We will have further actions over the upcoming days, and this is a warning to Hezbollah and the Lebanese government which must immediately take action,” he added.

“I say to all the honorable people, to the mujahedeen, to the heroes: I have always promised you a victory and now I pledge to you a new one” in Syria, he said at a ceremony marking the 13th anniversary of Israel’s military withdrawal from south Lebanon.