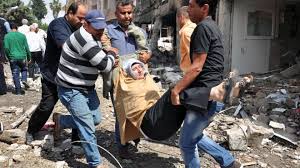 Turkish Foreign Minister Ahmet Davutoglu on Sunday blamed the world’s inaction on the Syrian conflict for the “barbarian act of terrorism” that claimed dozens of lives near the border.

“The latest attack shows how a spark transforms into a fire when the international community remains silent and the UN Security Council fails to act,” he said during a Berlin visit.

“It’s unacceptable for the Syrian and Turkish people to pay the price for this.”

Saturday’s twin bomb attack, which left at least 46 people dead and 100 wounded near the Syrian border, was the deadliest in Turkey in recent years.

The minister called it a breach of Turkey’s “red line” and said that “it’s time for the international community to display a common stance against the regime … immediately and without delay”.

He called for an “urgent, result-oriented diplomatic initiative” to find a solution to the Syrian crisis and added that “Turkey has the right to take any kind of measure” in response to the killings.

Davutoglu was meeting German Foreign Minister Guido Westerwelle, who expressed his condolences for the victims of the “barbaric act of terrorism” and pledged Germany’s support for Turkey.

The Turkish minister blamed the attack on “a former Marxist organisation directly connected with the regime” of Syrian President Bashar al-Assad.

Davutoglu also said the investigation was looking at “connections between the Banias massacre … and the latest terror attack” in Turkey.

Rights groups say at least 62 civilians were killed this month in an assault on a Sunni district of Banias, a Mediterranean city in Syria, after at least 50 people were killed in the nearby village of Bayda.