Edde: Assad has dug his own grave 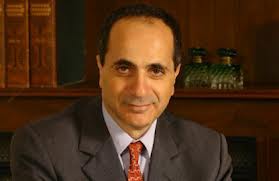 National Bloc leader Carlos Edde said that the Syrian regime will eventually fall since Syrian President Bashar Assad has dug his own grave.

“I cannot conceive of a possibility where the Assad regime stays in power. It will absolutely fall,” Edde said. “As Arab history has shown, there is a point that these regimes cannot stay. Assad has dug his own grave.” He told the Lebanese newspaper Daily Star in an interview published on Thursday.

As for the U.S. inaction regarding the Syrian crisis, Edde said that President Barack Obama’s administration no longer wanted to be involved in the Middle East as it was before.

“There are those against the Syrian regime in the [United] States and another group that does not want to get involved in what is happening. I think that Obama does not want to increase America’s commitment in the region,” Edde said.

Edde blames the rise of the Islamist in the region on the western support for Israel and the dictatorial regimes of te region and described their rise as a “consequence” rather than a “cause.”

“I think that the Islamist rise is not a cause but a consequence of the Western policy of support for Israel and blocking any possibility for a real meaningful solution and the result of dictatorial regimes that have had absolutely no respect for the rights of their citizens,” he said.

“It’s like a pendulum. When it swings too far in one direction, it is bound to swing as far in the opposite direction. On the medium or long run, it will come to equilibrium,” he said.

“I think all people eventually want the same basic things. They want comfort, security, dignity and a steady job with a steady income. … Islamists will eventually have to confront certain realities of job markets and economies and social reforms,” he added.

“Islamists will eventfully have to accommodate their point of view to reality or else they will be thrown out.”

No place for moderates in Lebanon

Commenting on the security situation in lebanon and the discussions about the electoral laws , Edde said that moderates no longer stand a chance in Lebanon because all political leaders have an interest in maintaining strife in the country.

“Unfortunately, political leaders have an interest in maintaining strife in the country because when they run for the elections they have nothing to offer the people expect hatred and fear. This is their way of mobilizing voters.”

“You also have the clergy, who do not want to give up their powers for the sake of a civil society. … All these groups have incited so much hatred that moderates are no longer to reach the hearts of the people.”

Edde, said that none of the electoral proposals put forward by different political groups sought to bring about constructive change.

“All electoral reform proposals have been made thinking of the results and not of representation,” said Edde, who favors a single-member-district voting system as used in France, the U.S. and several other countries.

Edde said the contest was being held to mark the centennial of his uncle, Raymond Edde, a long-time MP for Jbeil who championed the single-member district.