Hezbollah is once again in the eye of the storm! 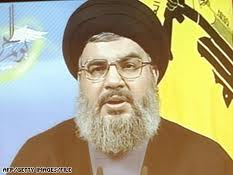 The past few weeks have not been easy for Hezbollah. On February 27, 2013 Secretary General Hassan Nasrallah appeared on the organization’s cable television station, al-Manar, to refute claims regarding his presumed serious illness and subsequent hospitalization for urgent treatment in Iran. Around the same time, reports from the Syrian opposition claimed that Nasrallah’s deputy, Sheikh Naim Qassem, had been seriously wounded (or according to other reports, killed) in Syria. These apparently fabricated reports come at a dire time for the organization, and together with a number of domestic, regional, and international “complications,” help undermine the organization’s reputation.

Indeed, Hezbollah’s support for the Assad regime has become a serious political liability. The Lebanese-Shiite organization has built its image and reputation as the vanguard of the “resistance” and the “defender of Lebanese national interests,” and its stark support for the authoritarian and oppressive Syrian regime has led many observers – both in Lebanon and in the rest of the Middle East – to expose Hezbollah’s double standard. This has somewhat tarnished the group’s prestige, which had peaked in the aftermath of its “divine victory” against Israel in the 2006 war. In the past year the group has been accused of doublespeak and hypocrisy, as well as of serving foreign – specifically Iranian – interests.In truth these events only strengthen the crisis already in place for over a year, driven largely by Hezbollah’s posture with respect to the internal conflict in Syria. While the group initially welcomed the arrival of the “Arab Spring” with open arms and vocally supported the protests in Tunisia or Egypt, its enthusiasm quickly faded as the winds of change began to threaten Hezbollah’s longtime friend and ally Bashar al-Assad and his regime in Syria.

The criticism has escalated in the past few months, along with the growing number of reports describing Hezbollah’s active participation in the Syrian conflict. In addition to political support, it seems that Hezbollah has also been directly involved in the Syrian civil war by providing guidance, training, and even active operational assistance to the Assad regime. While the number of Hezbollah fighters who have actually been deployed side-by-side with Assad in Syria is unknown, Hezbollah has clearly been doing much more than watching from the sidelines and has de facto become one of the warring parties. Confirming this trend, numerous reports have emerged over the past few weeks indicating that Syrian opposition forces have clashed with Hezbollah forces in Syria and would consider targeting them on the other side of the border, in Lebanon.

The growing involvement of Hezbollah in the Syrian civil war has affected its political reputation within Lebanon, with opposition forces openly accusing the organization of risking Lebanon’s being dragged into the Syrian quagmire. While Hezbollah is not the only Lebanese player participating in the hostilities in Syria – Sunni Islamists have also crossed the border to join the anti-Assad opposition forces – its institutional involvement is much more significant in terms of both magnitude and impact.

Hezbollah is also facing mounting international pressure. While the 2011 indictments of Hezbollah members issued by the United Nations Special Tribune for Lebanon in connection with the planning and execution of the 2005 assassination of Lebanese PM Rafik Hariri did not lead to a significant domestic or international backlash against Hezbollah, the recent Bulgarian accusations of direct involvement in the July 2012 Burgas terrorist attack might have a much greater impact. After months of investigations, the Bulgarian government accused Hezbollah of direct involvement in the terrorist attack that killed five Israelis and one Bulgarian citizen. In addition, a Lebanese-Swedish dual national arrested in Cyprus in July 2012 recently admitted during his trial to being a member of Hezbollah and stated that the organization had sent him to the island to collect information on Israeli flights, presumably in preparation for a terrorist attack.

These episodes are of particular significance because they have sparked a heated debate within the European Union regarding the stance toward Hezbollah. The EU has never included Hezbollah in its list of terrorist organizations, and the same is true for individual member states. The exception to this trend is the Netherlands, where Hezbollah is classified as a terrorist organization, and the UK, where the group’s military wing is designated as a terrorist group (while the political wing is recognized as a legitimate political organization). The British approach tried to condemn the group’s military activities while leaving the door open to political engagement. However, notwithstanding the possible political logic behind this approach, this politico-military division contradicts Hezbollah’s organizational reality, a group with a tight hierarchical structure and fierce internal cohesion.

In light of the mounting evidence implicating Hezbollah in terrorist operations on European soil, the EU is now reconsidering its approach

In light of the mounting evidence implicating Hezbollah in terrorist operations on European soil, the EU is now reconsidering its approach. The UK is pushing the EU to adopt its stance on Hezbollah, while other European countries, such as France, remain reluctant to share this position, fearing that targeting Hezbollah or its military wing would have a far broader impact on Lebanon, possibly destabilizing it further and exacerbating an already volatile situation, and also risk their own institutions and personnel serving in Lebanon. Currently, despite the calls of countries like Bulgaria to take a decisive stand against Hezbollah, the EU seems divided on the issue and unlikely to rush into any decision. Even so, the threat of designating Hezbollah as a terrorist organization only contributes to the pressure on the Lebanese-Shiite organization.

In the long term the combination of growing international pressure, domestic criticism, and direct involvement in the Syrian conflict spell trouble for the organization, threatening the international, regional, and domestic support for the organization. In addition, Hezbollah must brace itself for the post-Assad era. Within Lebanon, the end of the Assad regime would lead to major shifts in the political system, presumably empowering the anti-Syrian March 14 forces and perhaps giving the Cedar Revolution a second wind. It may also allow the Lebanese Salafi jihadist groups in Lebanon, backed by associates in Syria, to express their resentment and animosity to the dominance of the Shiite organization by increasing attacks against Hezbollah’s interests. Thus within Syria, the collapse of the regime would mean the end of the cozy patron-client relationship now in place between Assad and Hezbollah and the beginning of a new, far more uncertain phase.

Hezbollah is thus currently in a weaker position, especially from a political point of view. Nevertheless, from an Israeli perspective, Hezbollah remains a strong military organization and if hostilities broke out between it and Israel, would be still capable of engaging in a long and extremely damaging war. Israel should be mindful of upcoming developments, as a wounded tiger – especially one serving foreign interests – may behave provocatively in order to channel the criticism directed against it towards its bitter enemy.