Number of Syrian refugee could triple by year-end: U.N 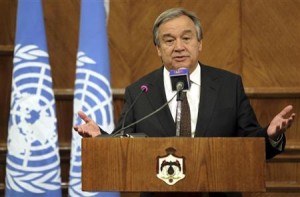 The number of refugees outside Syria could triple by the end of the year from the 1 million now if there is no resolution to the conflict, the head of the U.N. refugee agency said on Sunday.

The millionth Syrian refugee was registered in Jordan on Wednesday, following a dramatic acceleration in the number of civilians fleeing war in their homeland.

The uprising has since turned into an increasingly sectarian struggle between armed rebels and government soldiers and militias. An estimated 70,000 people have been killed.

The U.N. refugee body, UNHCR, says more than 400,000 Syrian refugees – nearly half the total – have fled Syria since January 1. Around half the refugees are children, most of them under 11.

“If this escalation goes on … we might have in the end of the year a much larger number of refugees, two or three times the present level,” High Commissioner for Refugees Antonio Guterres told reporters in Ankara.

“Everything depends on whether or not we will have a political solution but we need to be prepared for a very strong increase of the present numbers,” he said.

Most refugees have fled to Lebanon, Jordan, Turkey, Iraq and Egypt and some to North Africa and Europe. In addition to the refugees, the UNHCR says more than 2 million of Syria’s 22 million people have been internally displaced.

Guterres, who is on a 4-day visit to Turkey, also warned of the risk of an “explosion” in the Middle East if there was no political end to the conflict in Syria, which has increasingly spilled beyond its borders. He did not elaborate.

Guterres will meet Turkish leaders during his trip as well as visiting a refugee camp near the Syrian border.

In a meeting with four parliamentarians of Turkey’s main opposition Republican People’s Party (CHP) in Damascus on Thursday, Assad said he couldn’t control some parts of Syria, accusing Turkey of backing “terrorists”.

“We can’t control all parts of Syria. We are focused on big cities. There are terrorist attacks in the countryside,” Assad said according to the report published by CHP on Sunday.

“Some 75 percent of Syria’s border with Turkey is controlled by al Qaeda and some 25 percent is under the PKK (The Kurdistan Worker’s Party that is designated as a terrorist group by Turkey, U.S. and EU).”

The visit of the legislators angered Turkish Prime Minister Tayyip Erdogan, who was accused by Assad of desiring further tension in Syria. Turkey shares a 900-km (560-mile) border with Syria, and Erdogan is seen as a pivotal player in backing the Syrian opposition and in planning for the era after al-Assad.

“Erdogan and Qatari Emir have made the Syrian crisis a personal issue … to further survive in their positions and to adopt their Islamist agenda in Syria,” Assad said.

Turkey, which has more than 185,000 Syrians registered in camps on its territory, and tens of thousands more living in towns and cities, has long advocated setting up internationally protected zones inside Syria to protect fleeing civilians.

However, the notion has gained little traction in Western countries, who do not want to get further embroiled in the Syrian conflict.

Guterres said his agency was not against such safe zones in general but that they should not undermine the right for refugees to seek asylum in other countries.

Despite pledges of $1.5 billion by international donors for a U.N. response plan to help Syria’s displaced, only 25 percent has been funded, UNHCR has said.

Turkey alone says it has spent some $700 million setting up 17 refugee camps, with more under construction. But the country’s disaster and relief management body, AFAD, said last week the actual cost of caring for the refugees was closer to $1.5 billion.

There is no end in sight to the conflict in Syria, which has divided world powers.